OTTAWA, Canada – [Nov. 3, 2022] – For more than a decade, the Care4Rare Canada Consortium (Care4Rare) has provided answers for families living with undiagnosed rare disease. Care4Rare is an international trailblazer in rare disease, using cutting-edge technologies to discover the underlying cause while bringing diagnostic innovations into the clinical care pathway for rare disease.

More than one-third of the estimated 1 million Canadians living with rare disease lack a genetic diagnosis, despite lengthy and costly investigations. The families of Austin Osborne, 17, and Colton Borrelli, 11, endured a 10-year rare disease diagnostic odyssey before receiving answers thanks to Care4Rare. (See their stories, below.)

Published in The American Journal of Human Genetics, “Care4Rare Canada: Outcomes from a Decade of Network Science for Rare Disease Gene Discovery” synthesizes a decade of the national network’s research and clinical activities, and reflects on the incredible progress, lessons learned and challenges that lie ahead in providing a diagnosis for all families living with rare disease.

“It has been my distinct privilege to work with the clinical, research, and patient rare disease communities over the past decade to advance our knowledge and care for these important conditions,” said Dr. Kym Boycott, founder of Care4Rare, Senior Scientist at the CHEO Research Institute and Chair, Department of Genetics at CHEO, a pediatric health-care and research centre in Ottawa, Canada.

Care4Rare has been at the forefront of a rapid evolution in rare disease research over the past 10 years, fuelled by the emergence of genomic and related sequencing technologies and funding from Genome Canada, the Canadian Institutes of Health Research (CIHR), CHEO Foundation, Ontario Genomics, and other partners.

Care4Rare began in 2011, when genomics (decoding a person’s DNA) was being introduced to the research community. Through three eras of diagnosis and discovery, Care4Rare used genomics and other technologies and strategies to identify the genetic cause of hundreds of rare diseases, providing a diagnosis for 34% (623/1,806) of participating families, while discovering 121 genes not previously associated with disease.

In addition to these diagnoses and discoveries, Care4Rare has transformed the international rare disease community by developing platforms and protocols for collecting and sharing data, instigating Canadian and international networks to study novel genes in model organisms, and establishing international data-sharing networks to solve ultra-rare diseases. Throughout the decade, Care4Rare has worked with policy makers and health system leaders to integrate genomics into the diagnostic care pathway, improving access to this life-changing test for all Canadians living with rare disease.

“We’ve had so many successes in the past decade and come so far, but the challenge of solving all rare diseases remains enormous. The work is far from over,” said Dr. Boycott, who is also a Professor of Pediatrics at the University of Ottawa. “Every family deserves to have answers and Care4Rare will continue to work toward this goal.”

Austin Osborne was born in 2005 in Kingston, ON, and by the time he was one year old, his parents knew something was very wrong. Austin was developing much slower than his peers, had low muscle tone and he was often hospitalized due to self-harm injuries.

“Austin wasn’t able to walk or talk when he was younger. Out of frustration he would hit himself, smash his head off the floor, and hurt himself because he couldn’t talk. We were in and out of the hospital a lot. Doctors had no idea what to do,” said Heather Osborne, Austin’s mother.

Austin was first seen by the genetics team at CHEO in 2007, and was suspected to have Joubert syndrome, but genetic testing was negative for mutations in genes known to cause this rare brain malformation syndrome. In 2013, Austin’s younger brother Parker passed away from the same condition.

“When we lost Parker, we wanted his death to make a difference for other families going through the same thing as us, so we made sure we could donate samples from him for research purposes. This opened up new opportunities for finding answers,” said Lincoln Osborne, Austin’s dad.

Biological samples from Austin and Parker were tested in 2015 with updated genetic testing. Results came back negative again, so Dr. Boycott invited the family to participate in the Care4Rare project. Care4Rare performed exome sequencing, a test that examines the core content of all 20,000 genes in a person's DNA to look for rare mutations that cause disease. Results came back negative again, but Care4Rare did not give up - families stay with the research project until they get a diagnosis.

Every year we learn more about genes that cause rare disease, so in 2019 Care4Rare re-analyzed the exome data from Austin and Parker and found both had a rare mutation in one copy of a gene recently discovered to cause Joubert syndrome (the CEP120 gene). However, Joubert syndrome is recessive, so mutations in both copies of the gene are needed to cause disease. In 2022, Care4Rare performed cutting-edge tests to look for the second mutation: genome sequencing (examining the entire DNA sequence) and RNA sequencing (RNA is a working copy of the DNA code, delivering instructions to the protein-making factories of the cell.)

In 2022, 15 years after Joubert syndrome was first suspected and 10 years with the research program, Care4Rare identified a hard-to-detect mutation in the other copy of the CEP120 gene. This confirmed the diagnosis of Joubert syndrome, providing their family with a long-awaited answer to Austin’s condition. With this diagnosis, clinicians can provide Austin with the best care and his family can better advocate for his needs that will allow him to thrive.

“It took over a decade to get one piece of the puzzle. It was a relief when we finally got it. Austin represents less than 3% of all Joubert syndrome cases. He’s rare amongst rare,” said Lincoln.

Austin is now in Grade 12 and is proud to share he has been on the honour roll for every year he has been in school. He has received an award in each of his five subjects and is now turning his mind to what he will do after graduation.

Colton Borrelli was born in 2010 in Sault Ste. Marie, ON, and was referred to genetics soon after for intensive investigations. Standard genetic testing could not identify the cause of Colton’s low muscle tone, brain abnormalities, or profound delays in motor and communication skills. Dr. Boycott invited the family to participate in Care4Rare, and performed exome sequencing in 2012. Although some candidate genes were examined extensively, no clear answer was found. After re-analyzing his exome data in 2019, again with no answers, Care4Rare performed genome sequencing. In 2022, Care4Rare identified a mutation in both copies of the TBCK gene, which had been recently discovered to cause a rare neurogenetic disease. After 10 years with Care4Rare, Colton’s family finally has a name for the disease that ails him: TBCK-related neurodevelopmental disorder.

“When we finally received a diagnosis, the biggest thing for us was knowing other people out there were dealing with something similar. The condition is so new that there aren't necessarily any answers, but we’ve been able to connect with other families through Facebook and through the TBCK Foundation,” said Jessica Borrelli, Colton’s mom. “It was almost a relief to know that there were others out there. Even if it’s just someone to talk to who actually understands what we’re going through.”

Colton is still very developmentally delayed with low muscle tone. He moves around by army crawling or with assistive equipment exclusively, but Jessica is first to say he is the “happiest kid on the planet” and thinks “everything is hysterical.”

“We were happy to finally receive a reason why. It doesn’t change how we do things or give us answers about Colton’s future, but at least explains how and why he is who he is. Dr. Boycott and the entire team at Care4Rare have been absolutely phenomenal this entire time and were extremely caring throughout our journey,” said Antonio Borrelli, Colton’s dad.

Colton’s ultra-rare disease was only identified in 2016, with 90 affected families worldwide and only one other in Canada. A diagnosis has been life-changing for Colton’s family, helping his family advocate for his needs and access educational and financial resources that will allow him to thrive.

About the CHEO Research Institute

The CHEO Research Institute coordinates the research activities of CHEO and is affiliated with the University of Ottawa. The seven programs of research at CHEO RI focus on a full spectrum of pediatric topics. Key themes include cancer, diabetes, obesity, mental health, emergency medicine, musculoskeletal health, electronic health information and privacy, and genetics of rare disease. At the CHEO Research Institute, discoveries inspire the best life for every child and youth. For more information, visit cheoresearch.ca. 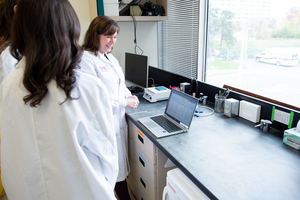 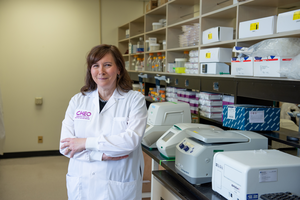 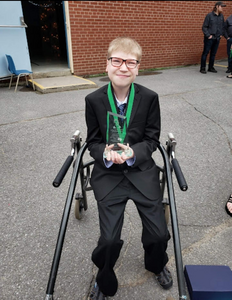 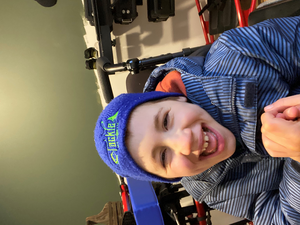