As part of a multipronged approach to prevent infestations by the parasitic plant Striga hermonthica, researchers are unravelling the role of plant hormones, known as strigolactones (SLs).

Cereal crops release SLs that regulate plant architecture and play a role in other processes related to plant development and stress response. The SLs released by plant roots attract mycorrhizal fungi, which provide plant nutrients. But strigolactones also induce germination and invasion by the parasitic plant Striga, with severe impacts on agricultural production, particularly on cereal yields in Africa.

In an important discovery, the team has recently shown that canonical SLs do not affect plant architecture in rice.

The researchers employed CRISPR/Cas9 technology to generate rice lines without canonical SLs and compared them to wild-type plants. The shoot and root phenotypes did not differ significantly between the mutants and the wild type, indicating that canonical SLs are not major regulators of rice architecture.

“Knowing which SLs regulate plant architecture and other functions, such as establishing symbiosis with beneficial mycorrhizal fungi or enabling invasion by root parasitic plants, will allow us to optimize and engineer one trait without affecting others,” explains Jian You Wang, a postdoc in Al-Babili’s lab.

The research showed that canonical SLs do contribute to a symbiosis with mycorrhizal fungi and play a major role in stimulating seed germination in root parasitic weeds.

“Decreasing their level, or even completely knocking out their biosynthesis, can significantly reduce the damage caused by Striga and other root parasitic plants without causing severe plant architectural changes or having a large negative impact on plant mycorrhization,” says Wang.

Modulation of SL content by gene editing is a long-term solution, but the application of specific inhibitors of SL biosynthesis may lead much faster to cereal plants lacking the canonical strigolactones.

They also tested the effect of TIS108 on Indica rice and sorghum, both major crops in Striga- infested regions in Africa. Once again, they observed lower Striga germination activity from the root exudates isolated from treated plants.

“We are really excited about this discovery; it could be used to alleviate Striga infestation and provide directions in SL biology,” he says.

The group is now investigating the effect of TIS108 on pearl millet, a wider project funded by the Bill & Melinda Gates Foundation, aiming to improve the architecture of this cereal and increasing its resistance towards Striga.

Based on their structure, SLs are classified as either canonical or noncanonical. Understanding the roles of each of these subfamilies is important for developing Striga-resistant cereals as well as for engineering plant architecture, says Justine Braguy, a former Ph.D. student in the group of Salim Al Babili, a world expert in strigolactone and Striga research. 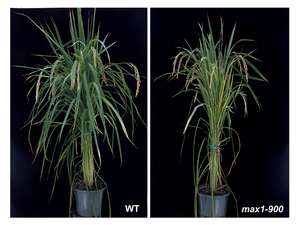