A first-of-its-kind study reveals alarming findings about the level of microplastic pollution on Israel’s beaches:

The Israeli coastline is contaminated with over two tons of microplastics

A new Tel Aviv University study conducted in collaboration with the Mediterranean Sea Research Center of Israel examined the level of microplastic pollution along Israel’s coastline. The researchers collected sand samples from six beaches, from Haifa to Ashkelon. The research findings revealed that the Israeli shoreline is contaminated with more than two million tons of microplastics, with the most polluted beaches being those of Tel Aviv and Hadera.

In light of these worrying findings, the researchers warn exposure to microplastic waste is unavoidable. It should be noted that microplastics are generally proved as dangerous both to the environment and to human health. .

The study was led by doctoral student Andrey Ethan Rubin and master’s student Limor Omeysi from the laboratory of Dr. Ines Zucker of the Fleischman Faculty of Engineering and the Porter School of the Environment and Earth Sciences. The study was published in the scientific journal Marine Pollution Bulletin.

Rubin explains that over the course of 2021, the researchers collected samples from six areas along the coast: Ashkelon, Rishon LeZion, Tel Aviv, Hadera, Dor Beach and Haifa. The samples were then taken to the laboratory where various analyses were performed, including particle count, mass measurements, image analysis, and chemical analysis to identify the polymer the plastic was made up of, as well as the elements adsorbed onto the microplastic particles. The researchers discovered, among other things, that the samples included plastic originating from food packaging, single-use plastic products, and fishing nets.

“It was interesting to see that plastics of terrestrial origin, such as food packaging, were more dominant than plastics of marine origin,  such as fishing nets,” says Rubin. “This indicates a need for better regulation of coastal waste.”

The research findings show that the beaches of Tel Aviv and Hadera were the most polluted of the beaches tested. The level of contamination on these beaches, which are located near stream estuaries (the Yarkon in Tel Aviv and Nahal Alexander in Hadera) was four times higher than that of Rishon Lezion and Dor Beach, which were the two beaches with the lowest concentration of microplastic particles. Still, even in the Dor Beach nature reserve, which is cleaned frequently, a considerable amount of microplastic particles were found.

The researchers’ assessment is that the high level of pollution on the beaches of Tel Aviv and Hadera and the fact that they are in close proximity to streams indicates that the stream’s waters carry microplastic particles with them into the sea, thereby intensifying the level of contamination on the beach.

For example, the researchers say that Nahal Alexander collects leachate from untreated sewage from the West Bank, as well as waste from agricultural and industrial areas located near the riverbeds. Similarly, microplastics accumulate at the Yarkon River from the industrial centers in Tel Aviv.

“Our research reveals that the Israeli coastline likely contains over two tons of microplastic waste,” says Rubin. “Environmental conditions slowly break this plastic down into even smaller particles. The smaller the plastic particles, the harder it is to remove them from the environment, and the more dangerous they are to the environment and to our health. The microplastic particles that drift into the sea are swallowed by fish, and their remains eventually reach humans.”

Dr. Zucker adds: “Our microplastic studiesy reveal the current state of microplastic pollution along Israel’s Mediterranean coast and provide knowledge on the effects of the presence of microplastics in the environment. Plastic monitoring research in Israel is still lacking, and we must monitor the smaller plastic particles and additional environmental samples, such as sea water and streams, in order to better understand environmental patterns with regards to the presence of microplastics. This way or another, it would appear that exposure to microplastic waste is inevitable. We are working on assessing the environmental and health impacts that may arise given the prevalence and high concentrations of the particles that we found. In a practical perspective, regulatory steps are required in order to reduce Israel’s contribution to microplastic pollution in the Mediterranean.”

The Israeli coastline is contaminated with over two tons of microplastics 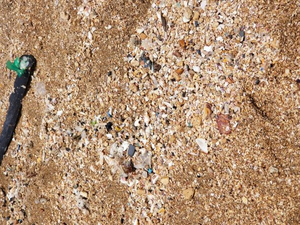 Plastic waste at the beach. 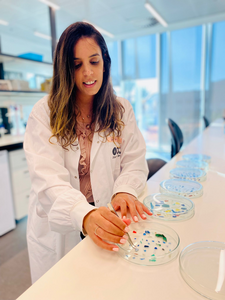