Ithaca & Rochester, NY—When it comes to the biological imperatives of survival and reproduction—nature often finds a way. Sometimes more than one way. For a species of flycatcher in the remote Solomon Islands, scientists have so far found at least two genetic pathways leading to the same physical outcome: all-black feathers. This change was no random accident. It was a result of nature specifically selecting for this trait. The new study is published in the journal PLOS Genetics.

"The Chestnut-bellied Flycatcher is not as well-known as Darwin’s finches," said lead author Leonardo Campagna, an evolutionary geneticist at the Cornell Lab of Ornithology. "But this complex of birds has also gone through many evolutionary changes, many of which involve changes in the coloration and patterning of their plumage."

The scenario: A large population of chestnut-bellied birds lives on one of the bigger islands in the Pacific chain. From there, some birds established new populations on a couple of smaller islands. Over time, birds on the two smaller islands lost their chestnut bellies and became all black. But the birds on each island developed black plumage at different times, from different genetic mutations which moved rapidly through the small island populations. One of these mutations spread during the last 1,000 years—a mere blink in evolutionary time.

"Clearly there's something advantageous about having all-black plumage," said Campagna. "We’ve traced this trait back through time by sequencing the entire Chestnut-bellied Flycatcher genome for the first time. The two mutations that lead to black plumage appeared at different times, on different islands, and on different genes related to melanin pigment production. That level of convergence is wild!"

The various flycatcher populations are in the early stages of speciation—splitting off to form new species—but they have not yet diverged much genetically and they can interbreed. But they rarely do, producing a few hybrids. Field experiments have shown the chestnut-bellied birds and the all-black birds each react aggressively toward a perceived interloper with their own plumage color, but do not respond the same way to the members of their species with a different color.

And it turns out Mother Nature is not done tinkering with the flycatcher genome.

"We’re finding there’s a third melanic (all black) population of flycatchers among islands about 300 miles away from the original island," said senior co-author Al Uy, a biology professor at the University of Rochester. "The mutation governing their plumage color is different yet again from those on the other two islands we studied."

Uy has been studying the Solomon Islands flycatchers for about 15 years, aided by a trusted group of indigenous islanders he says have been "instrumental" in his work.

"I think the emerging pattern is that there's something about small islands that's favoring these all-black birds—in the more distant archipelago were melanism has evolved for the third time, we found that melanic and chestnut-bellied birds still coexist within each island but as islands get smaller, the frequency of melanic birds goes up."

There are multiple theories about what's driving the switch to back plumage, including female preference, the greater durability of black feathers, and even a possible link to genes that govern other advantageous behaviors.

The study authors include computer scientists Ziyi Mo and Adam Siepel from Cold Spring Harbor Laboratory who wrote the machine learning program that helped the researchers dig deeper into the past and measure mutation patterns in the flycatcher "family tree."

"The use of machine learning is an exciting new development in the field of population genetics," said Campagna. "We train the computer to recognize specific evolutionary patterns for when a particular genetic trait started, how strong natural or sexual selection was, and how quickly it moved through a population. We can then ask the trained algorithm to tell us the most likely scenario that generated the data that we observe in the present populations. It's like going back in time.'

Study: More than one way to build a black bird 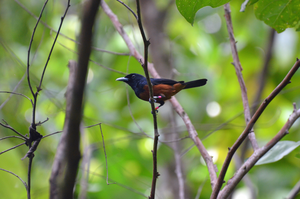