Rotary molecular motors were first created in 1999, in the laboratory of Ben Feringa, Professor of Organic Chemistry at the University of Groningen. These motors are driven by light. For many reasons, it would be good to be able to make these motor molecules visible. The best way to do this is to make them fluoresce. However, combining two light-mediated functions in a single molecule is quite challenging. The Feringa laboratory has now succeeded in doing just that, in two different ways. These two types of fluorescing light-driven rotary motors were described in Nature Communications (30 September) and Science Advances (4 November).

‘After the successful design of molecular motors in the past decades, an important next goal was to control various functions and properties using such motors,’ explains Feringa, who shared in the Nobel Prize in Chemistry in 2016. ‘As these are light-powered rotary motors, it is particularly challenging to design a system that would have another function that is controlled by light energy, in addition to the rotary motion.’

Feringa and his team were particularly interested in fluorescence since this is a prime technique that is widely used for detection, for example in biomedical imaging. Usually, two such photochemical events are incompatible in the same molecule; either the light-driven motor operates and there is no fluorescence or there is fluorescence and the motor does not operate. Feringa: ‘We have now demonstrated that both functions can exist in parallel in the same molecular system, which is rather unique.’

Ryojun Toyoda, a postdoctoral researcher in the Feringa group, who now holds a professor position at Tohoku University in Japan, added a fluorescent dye to a classic Feringa rotary motor. ‘The trick was to prevent these two functionalities from blocking each other,’ says Toyoda. He managed to quench the direct interactions between the dye and the motor. This was done by positioning the dye perpendicular to the upper part of the motor to which it was attached. ‘This limits the interaction,’ Toyoda explains.

In this way, the fluorescence and the rotary function of the motor can coexist. Furthermore, it turned out that changing the solvent allows him to tune the system: ‘By varying the solvent polarity, the balance between both functions can be changed.’ This means that the motor has become sensitive to its environment, which could point the way for future applications.

Co-author Shirin Faraji, professor of Theoretical Chemistry at the university of Groningen, helped to explain how this happens. Kiana Moghaddam, a postdoc in her  group, performed extensive quantum mechanical calculations and demonstrated how the key energetics governing the photo-excited dynamics strongly depend on the solvent polarity.

Another useful property of this fluorescing motor molecule is that different dyes could be attached to it as long as they have a similar structure. ‘So, it is relatively easy to create motors that are glowing in different colours’, says Toyoda.

A second fluorescent motor was constructed by Lukas Pfeifer, also while working as a postdoctoral researcher in the Feringa group. He has since joined the École Polytechnique Fédérale in Lausanne, Switzerland: ‘My solution was based on a motor molecule that I had already made, which is driven by two low-energy near-infrared photons.’ Motors that are powered by near-infrared light are useful in biological systems, as this light penetrates deeper into tissue than visible light and is less harmful to the tissue than UV light.

‘I added an antenna to the motor molecule that collects the energy of two infrared photons and transfers it to the motor. While working on this, we discovered that with some modifications, the antenna could also cause fluorescence,’ says Pfeifer. It turned out that the molecule can have two different excited states: in one state, the energy is transferred to the motor part and drives rotation, while the other state causes the molecule to fluoresce.

‘In the case of this second motor, the entire molecule fluoresces,’ explains Professor Maxim Pshenichnikov, who performed spectroscopic analysis of both types of fluorescent motor and who is a co-author of both papers. ‘This motor is one chemical entity on which the wave function is not localized and, depending on the energy level, can have two different effects. By altering the wavelength of the light, and thus the energy that the molecule receives, you get either rotation or fluorescence.’ Faraji adds: ‘Our synergized in principle and in practice approach highlights the interplay between theoretical and experimental studies, and it illustrates the power of such combined efforts.’

Now that the team has combined both motion and fluorescence in the same molecule, a next step would be to show motility and detect the molecule’s location simultaneously by tracing the fluorescence. Feringa: ‘This is very powerful and we might apply it to show how these motors might traverse a cell membrane or move inside a cell, as fluorescence is a widely used technique to show where molecules are in cells. We could also use it to trace the movement that is induced by the light-powered motor, for instance on a nanoscale trajectory or perhaps trace motor-induced transport on the nanoscale. This is all part of follow-up research.’ 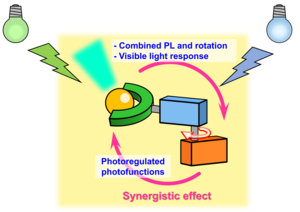 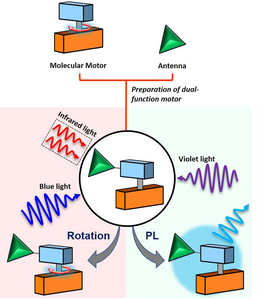