Researchers from the University of Eastern Finland and Tampere University have published in the journal Molecular Ecology a comprehensive study on the significance of species differences for the most central cell maintenance mechanisms. The researchers used the brown hare (Lepus europaeus) and the mountain hare (Lepus timidus) as model organisms in their study.

The evolutionary lineages of the brown hare and the mountain hare separated about three million years ago. The mountain hare evolved in the Beringian region and its closest relatives live in the Americas and in the Far East. The mountain hare came to Europe early, living on the continent already during the Ice Age. It still has an impressive continuous distribution from the Nordic Countries to the Far East Russia. In contrast, the brown hare evolved in the Near East or the Caspian region, and its closest modern relatives live in Africa and the Near East.

As a consequence of their different evolutionary trajectories, the mountain hare is a cold- and snow-adapted, a Taiga Forest and an arctic species, whereas the brown hare is a more temperate, open bushland-adapted species. Besides these habitat differences, the two species differ in many other aspects of their biology. Brown hares reach sexual maturity earlier and have higher reproductive capacity than mountain hares. Mountain hares, in contrast, live longer, have higher body temperature and can utilise poorer quality nutrition than brown hares. These differences have evolved during millions of years of natural selection resulting in genomic differences. Despite these differences, the two species hybridize and produce fertile offspring. The authors of the study were especially interested in how these genomic differences translate into phenotypic differences in the most fundamental cellular functions, and if these functional differences explain the observed biological differences.

When studying cell lines from four brown hares and four mountain hares, the researchers noticed fundamental differences in the regulation of several gene groups. Some of these enabled brown hare cells to proliferate faster than mountain hare cells, which correlated with how the species age and reach maturity. The difference in cell proliferation could be further pinpointed to the differences in cell cycle regulation. There were also differences in energy metabolism, which together with cell cycle regulation demonstrate how the two species differ in their investment of resources for various features of their basic cell functions. The same differences in the investment of resources are likely to be reflected in the ageing and reproduction of the two species.

The study helps to understand how genomic differences translate into adaptive phenotypic differences between the species, how differences in life history strategies manifest on the cellular level and how species boundaries might form at the molecular level. Some observations from the hare cells are also relevant to understanding human ancestral hybridization, ageing and metabolic diseases. The research also demonstrated that cultured cells can be used to study the ecological and physiological features of wild animals, which reduces the need for invasive sampling and animal experimentation. 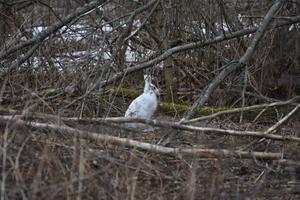