The exceptional excavation of a Stone Age burial site was carried out in Majoonsuo, situated in the municipality of Outokumpu in Eastern Finland. The excavation produced microscopically small fragments of bird feathers, canine and small mammalian hairs, and plant fibres. The findings gained through soil analysis are unique, as organic matter is poorly preserved in Finland’s acidic soil. The study, led by Archaeologist Tuija Kirkinen, was aimed at investigating how these highly degraded plant- and animal-based materials could be traced through soil analysis.

During the Stone Age in Finland, the deceased were interred mainly in pits in the ground. Little of the organic matter from human-made objects have been preserved in Stone Age graves in Finland, but it is known, on the basis of burial sites in the surrounding regions, that objects made of bones, teeth and horns as well as furs and feathers were placed in the graves.

Teeth and arrowheads found in the red ochre grave

The Trial Excavation Team of the Finnish Heritage Agency examined the site in 2018, as it was considered to be at risk of destruction. The burial place was located under a gravelly sand road in a forest, with the top of the grave partially exposed. The site was originally given away by the intense colour of its red ochre. Red ochre, or iron-rich clay soil, has been used not only in burials but also in rock art around the world.

In the archaeological dig at the burial site, only a few teeth were found of the deceased, on the basis of which they are known to have been a child between 3 and 10 years of age. In addition, two transverse arrowheads made of quartz and two other possible quartz objects were found in the grave. Based on the shape of the arrowheads and shore-level dating, the burial can be estimated to have taken place in the Mesolithic period of the Stone Age, roughly 6,000 years before the Common Era.

What made the excavation exceptional was the near-complete preservation of the soil originating in the grave. A total of 65 soil sample bags weighing between 0.6 and 3.4 kilograms were collected, also comparison samples were taken from outside the grave. The soil was analyzed in the archaeology laboratory of the University of Helsinki. Organic matter was separated from the samples using water. This way, the exposed fibres and hairs were identified with the help of transmitted-light and electron microscopy.

From the soil samples, a total of 24 microscopic (0.2–1.4 mm) fragments of bird feathers were identified, most of which originated in down. Seven feather fragments were identified as coming from the down of a waterfowl (Anseriformes). These are the oldest feather fragments ever found in Finland. Although the origin of the down is impossible to state with certainty, it may come from clothing made of waterfowl skins, such as a parka or an anorak. It is also possible that the child was laid on a down bed.

In addition to the waterfowl down, one falcon (Falconidae) feather fragment was identified. It may have originally been part of the fletching of the arrows attached to the arrowheads, or, for example, from feathers used to decorate the garment.

Besides the feathers, 24 fragments of mammalian hair were identified, ranging from 0.5 to 9.5 mm in length. Most of the hairs were badly degraded, making identification no longer possible. The finest discoveries were the three hairs of a canine, possibly a predator, found at the bottom of the grave. The hairs may also originate, for example, in footwear made of wolf or dog skin. It is also possible a dog was laid at the child’s feet.

“Dogs buried with the deceased have been found in, for example, Skateholm, a famous burial site in southern Sweden dating back some 7,000 years,” says Professor Kristiina Mannermaa, University of Helsinki.

“The discovery in Majoonsuo is sensational, even though there is nothing but hairs left of the animal or animals – not even teeth. We don’t even know whether it’s a dog or a wolf,” she says, adding: “The method used, demonstrates that traces of fur and feathers can be found even in graves several thousands of years old, including in Finland.”

“This all gives us a very valuable insight about burial habits in the Stone Age, indicating how people had prepared the child for the journey after death”, says Kirkinen.

The soil is full of information

Also found were three fragments of plant fibres, which are preserved particularly poorly in the acidic Finnish soil. The fibres were what are known as bast fibres, meaning that they come from, for example, willows or nettles. At the time, the object they were part of may have been a net used for fishing, a cord used to attach clothes, or a bundle of strings. For the time being, only one other bast fibre discovery dating back to the Mesolithic Stone Age is known in Finland: the famed Antrea Net on display in the National Museum of Finland, laced with willow bast fibres.

A fibre separation technique was developed in the study, and is already being applied in subsequent studies. The project has demonstrated the great information value of soil extracted from archaeological sites.

The study was published in the PlosONE series. In addition to Kirkinen and Mannermaa, contributing to the study were Olalla López-Costas and Antonio Martínez Cortizas from the EcoPast research group at the University of Santiago de Compostela, Sanna P. Sihvo, Hanna Ruhanen and Reijo Käkelä from the Helsinki University Lipidomics Unit (HiLIPID), Marja Ahola and Johanna Roiha from the discipline of archaeology at the University of Helsinki, Jan-Erik Nyman, Esa Mikkola and Janne Rantanen from the Archaeological Field Services unit of the Finnish Heritage Agency and Esa Hertell from the museums of the City of Lappeenranta. 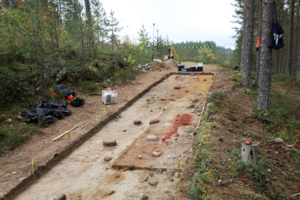 The red-ochre burial site of the child in Majoonsuo. 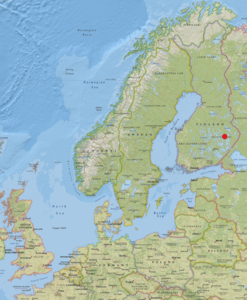 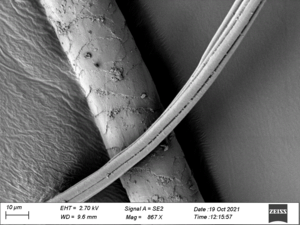 An electron microscope image of a possible canine hair