The South China Sea is where most tropical cyclones (TCs) attack the Chinese mainland, but a lack of observational data has for decades hindered our ability to forecast them. In August 2022, a successful field campaign during TC Mulan boosted confidence in forecasting similar events in the future. The results of the campaign were recorded and published in Advances in Atmospheric Sciences.

The campaign, starting on 5 August, collected observations simultaneously using China's FengYun-4B geostationary satellite, aircraft equipped with dropsondes (weather devices designed to be dropped from aircraft at specified altitudes), and balloons equipped with radiosondes (a small instrument suspended below the balloon). The project was a collaboration between the China Meteorological Administration (CMA), Institute of Atmospheric Physics (Chinese Academy of Sciences), Fudan University, and the Hong Kong Observatory (HKO), the latter of whom has a six-year history in collecting meteorological data using aircraft.

“We at HKO were honoured to have the chance to collaborate with the CMA and other scientific institutes on the Chinese mainland for this project”, says Mr. Pak-Wai CHAN of HKO, who arranged the aircraft flight into the TC in collaboration with the Government Flying Service in Hong Kong. “This joint effort is a landmark in enhanced meteorological observations over the South China Sea.”

“We were excited to find that the enhanced observational data displayed positive impacts on both the track and intensity forecasts of TC Mulan”, explains Prof. Wei Han from the Earth System Modeling and Prediction Centre at the CMA, who arranged the satellite observations and the subsequent operational forecasts. “Moreover, rainfall forecasts along the South China coast were more accurate with these data”.

These results confirm the findings of the team's previous research in which dropsonde data were used to observe four TC cases in 2020.

“We hope to conduct more such field campaigns in the future to collect evermore useful observations of TCs. Not only operational forecasting but also basic scientific research will benefit greatly from these data”, concludes Dr Xiaohao Qin from the Institute of Atmospheric Physics, Chinese Academy of Sciences, who identified the optimal observation area for both the satellite and aircraft measurements in this campaign. 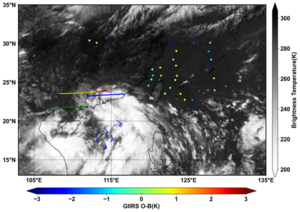