The natural cycles of exchange of substances between the biosphere and the atmosphere are of major relevance to the Earth's climatic system. Perhaps the best-known example of this is the carbon cycle that involves the transfer of carbon between the atmosphere, the land biosphere, and the oceans. This cycle is responsible for ensuring that temperatures on our planet's surface are hospitable to life. However, there are also other important cycles of elements, such as that of sulfur. The emission of sulfur compounds from marine phytoplankton assumedly leads to the generation of water vapor-based condensation nuclei in the marine atmosphere, resulting in cloud formation. In other words, there is a natural feedback system that contributes to the stabilization of the Earth's surface temperatures. An international team of researchers has now identified a further element associated with marine algae that exhibits remarkably interlinked cyclical reactions in the marine atmosphere. This element is iodine. Their findings have been published recently in Proceedings of the National Academy of Sciences (PNAS).

Iodine is a halogen and thus belongs to a group of elements present in larger concentrations in seawater. Although the levels of iodine are far lower than those of, for instance, chlorine in the form of sea salt, this iodine exhibits certain unusual chemical features. "Initially, the process is similar to that of the sulfur cycle," explained Professor Thorsten Hoffmann of Johannes Gutenberg University Mainz (JGU). Marine phytoplankton convert the iodate present in the oceans into iodide, presumably so that they can employ this iodide as a simple inorganic antioxidant to protect their own cell walls. Iodide present at the water surface then also reacts with atmospheric ozone, releasing molecular iodine. This molecular iodine, through a succession of rapid atmospheric reactions, is transformed into iodine oxide, a substance that is very prone to take the form of aerosol particles. "These particles can grow into larger particles that can serve as cloud condensation nuclei and thus influence cloud formation," added Hoffmann. "However, in the case of iodine, in contrast with sulfur, the corresponding process is by no means at an end at this point."

In their PNAS article, the authors describe how a notable fraction of the molecular iodine formed in the growing atmospheric particles of the already generated iodine oxides is recycled back into the gas phase. "As far as we are currently able to establish, iodine is the only element that does not leave the atmosphere after being released from the Earth's surface but can be returned to the gas phase through redox reactions while it is still in the particle phase," clarified Hoffmann, who is a professor at JGU's Department of Chemistry. This means that iodine may well act as a significant catalyst when it comes to cloud formation. A series of unresolved questions remains, however. Among other things, it is still unclear to what extent human activity, which intervenes in this process at various points, impacts on this unique iodine cycle.

Participating in the project were, in addition to researchers at Mainz University, their colleagues at the Chinese Academy of Sciences, the California Institute of Technology (Caltech) in Pasadena, and the University of Galway.

Iodine accelerates formation of cloud condensation nuclei in the atmosphere 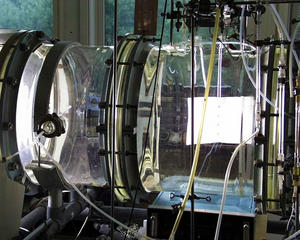