A new short volume by veteran science writer George Musser covers the concept of emergence in two domains of physics: the physics of materials (known as condensed matter) and the physics of space and time (known as quantum gravity). Both areas have gone through a mini-revolution over the past two decades. In condensed matter, physicists have realized that nature is replete with states of matter beyond the usual solid, liquid, and gas. These so-called quantum and topological phases were recognized by the Nobel Prize in physics, in 2016. As for quantum gravity, theorists are coming around to the idea that space and, perhaps, time are not fundamental, but emerge from a deeper level of physics. Musser’s Emergence in Condensed Matter and Quantum Gravity, published by Springer, is now available to purchase.

“In physics, boring means interesting,” says Musser, a member of the Foundational Questions Institute, FQXi, a physics think tank. Take air, for example. It obeys very simple laws of pressure and temperature, but imagine zooming into the molecular level, and the molecules bounce and spin and carom at such a pace and in such vast numbers that it blows the mind. How do all those billions upon billions of molecules come to behave so simply to our eyes? How, for that matter, do all the molecules in a snowflake or a crystal of salt achieve such beautiful forms, without any guiding hand—just their own mutual interactions?

This is the subject of emergence: the way that lots of molecules, particles, or other basic units work together collectively to achieve something greater than any of them. It is one of the most important concepts in science, yet also the most fraught. In his new book, Musser provides an introduction to this fascinating area, reviewing the scientific literature in a way that is accessible for novices, while highlighting newer work that keeps experts up to date. The new hardcopy book and online resource was published by Springer on 10th August 2022, and grew from an in-depth report that Musser prepared for the John Templeton Foundation, JTF, and the Foundational Questions Institute, FQXi, which was published in December 2021.

Musser begins with an introduction describing how the concept of emergence in science has become increasingly critical. The second chapter takes a deep dive into some of the most exciting new materials discovered and engineered–from so-called strange metals to topological insulators–and how their game-changing properties could revolutionize aspects of medical treatment, electronics and quantum computers. Graphene is one of the best known examples, but Musser uncovers many more. “One of my favorites was topological insulators, because they’re such an intellectual puzzle, and because they crop up in so many different settings,” says Musser. “You get the feeling that there’s so much more to learn about them.”

Universe as a Hologram

Next Musser moves from lab-made materials to the opposite extreme, the formation of space itself, possibly from quantum building blocks, explaining why our universe might be thought of as a hologram along the way. “There’s so much talk about how physicists disagree—complaints about string theory get a lot of press,” says Musser. “But here’s a case where they actually reach some agreement. Space doesn’t seem to be fundamental to the universe.” In the final chapter, Musser explores explicit links between condensed matter theories, string theory and the emergence of space and time.

"Space doesn’t seem to be fundamental to the universe."

The volume includes graphics that help elucidate two of the most complex physical effects: the Hall effects in condensed matter physics that give rise to some of the most bizarre and useful properties of some exotic materials; and spacetime holography in quantum gravity, which relates to the emergence of spacetime from more fundamental quantum processes.

“Musser describes a series of deep resonances drawing together seemingly disparate arenas of physics,” says FQXi’s Zeeya Merali, who edited Musser’s original report for the Foundational Questions Institute. “These surprising connections open the door to experiments that could shed light on how mysterious materials work and even how the universe as we know it emerged.”

An accomplished and award-winning science writer, Musser has a background in electrical engineering, mathematics and planetary science. He served as Scientific American’s physics editor for over a decade and has already published popular physics books on string theory and on quantum physics. “Musser is renowned for his ability to simplify mind-bending ideas for a general audience, with wit and charm,” says Merali. “He also has a great nose for sniffing out which nascent theories will eventually lead to profound shifts in our understanding of the foundations of reality, which has earned him the respect of the professional physics community too.”

For review copies of Emergence in Condensed Matter and Quantum Gravity, contact Angela Lahee at Springer (angela.lahee@springer.com), and to speak with the author, reach out to George Musser (strings@musser.com). The book’s table of contents is available here. Musser is able to talk about the properties of weird phases of condensed matter including superconductors, Bose Einstein Condensates, strange metals and topological insulators—and their potential applications. Turning to the origin of space, he can also discuss how space may emerge from quantum effects, such as entanglement, the holographic principle, and how space can be conceived of as an error-correcting code.

Musser’s original Emergence report was produced by the Foundational Questions Institute, FQXi, in partnership with, and supported by, the John Templeton Foundation, JTF. It was part of a series exploring the frontiers of physics research. Other reports in the series tackle how our universe came into existence, whether time is real, and whether physical parameters in our cosmos are finely tuned to give rise to intelligent life.

Other books available in the FQXi/Springer popular science series include Cosmic Origins: Science's Long Quest to Understand How Our Universe Began, by science journalist Mitch Waldrop, which was published in March 2022.

The Hall Effects graphic by Elfy Chiang, the Spacetime Holography graphic by Maayan Harel, and others can be downloaded from FQXi.

The Foundational Questions Institute, FQXi, catalyzes, supports, and disseminates research on questions at the foundations of science, particularly new frontiers in physics and innovative ideas integral to a deep understanding of reality but unlikely to be supported by conventional funding sources. Visit fqxi.org for more information.

From Graphene to Gravity: Exploring the Physics of Emergence 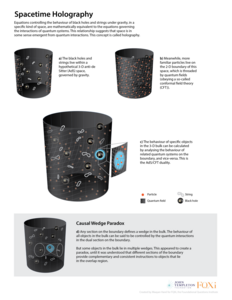