An international team of scientists, including researchers at the University of Adelaide, have gathered new evidence about the energetic core of an active galaxy millions of lights years away by detecting neutrino particles emitted by it.

The scientists have found that NGC 1068, also known as Messier 77, in the constellation of Cetus, is a high-energy neutrino emitter. They have observed the particles using the IceCube Neutrino Observatory in Antarctica.

“We are peering inside active regions of the NGC 1068 galaxy 47 million light years away,” says Associate Professor Gary Hill, from the University of Adelaide’s Department of Physics, School of Physical Sciences and member of the international IceCube Collaboration.

“As we observe neutrinos emitted by it we will be able to learn more about the extreme particle acceleration and production processes occurring inside the galaxy, which hasn’t been possible up to now as other high energy emissions can’t escape from it.”

Neutrinos are subatomic particles that normally pass, by the trillion, through our bodies and every part of the Earth every second, but they rarely interact with matter – a fact that makes them difficult to detect.

The observations were made by the IceCube Neutrino Observatory at the Amundsen-Scott South Pole Station, which was completed in late 2010. NGC 1068 is visible with large binoculars and has been the subject of many astronomical observations.

In 2018, IceCube found the first ever source of neutrinos emitted by TXS 0506+056, a very distant blazar, from which super-massive black hole-powered particle jets, pointing straight at Earth, emit neutrinos. This led to the joint observations over a short time period of neutrinos and gamma-rays.

The NGC 1068 galaxy is about 100 times closer and around 80 neutrino events have so far been identified from the active galaxy. In contrast to the TXS 0506+056 blazar, NGC 1068 is oriented relative to Earth in such a way that a direct view of the central emitting region is obscured by dust. Gamma-rays are absorbed but the neutrinos can escape uninhibited from these regions.

“After the excitement in 2018 of the discovery of neutrinos from TXS 0506+056, it’s even more thrilling to find a source producing a steady stream of neutrinos that we can see with IceCube,” says Associate Professor Hill.

“The fact that neutrinos can escape from within these otherwise-obscured regions of the universe means they are also hard to detect. This requires large detectors like IceCube, which is the current leader in the field with an instrumented volume of a cubic kilometre of deep South Pole ice.”

Many neutrinos pass clear through the Earth, but some interact in the ice near the detector and create muons, which emit flashes of light that are picked up by IceCube’s more than 5000 basketball-sized optical sensors spread over 86 strings, deployed into holes drilled to nearly 2500 metres depth and now permanently frozen into the deep ice. The patterns of light are used to infer the arrival directions and energies of the particles.

“One of the best aspects of my research journey so far has been the time I have spent at the South Pole over many summer seasons working on the installation teams deploying the detector strings into the ice” says Associate Professor Hill.

“The enormous size of IceCube required many years of effort from hundreds of people around the world to complete construction and understand the response to high energy particles. In a few years we’ll be back to the South Pole to put more instruments into the ice, as part of an effort to further improve the detector.”

A future expansion of the detector, dubbed IceCube-Gen2, would be able to detect many more neutrinos, resolve more of these sources and make observations at even higher energies.

The IceCube Neutrino Observatory is operated by the IceCube Collaboration, consisting of over 350 scientists at 58 institutions around the world: https://icecube.wisc.edu/collaboration/institutions

Major funding comes from the US National Science Foundation, and from funding agencies in all other participating countries. The University of Adelaide IceCube research is supported by the Australian Research Council.

The team’s results are published in the journal Science. 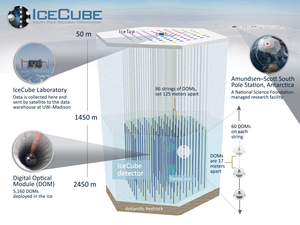