Breakthrough research addresses a long-standing question in pulmonary medicine about whether modern ventilators overstretch lung tissue. They do.

These cutting-edge findings by UC Riverside researchers were recently published in the American Journal of Respiratory and Critical Care Medicine. They demonstrate major differences between how we naturally breathe versus how ventilators make us breathe. These results are critical, particularly in context of the COVID-19 pandemic and the rush to build ventilators.

“Using novel techniques, we observed that ventilators can overextend certain regions of the lungs,” said Mona Eskandari, UCR assistant professor of mechanical engineering and the BREATHE Center in the School of Medicine, who led the research. These results provide an explanation for the decline in lung health experienced by patients the longer they spend on the machines, especially in the case of disease.

Eskandari’s bMECH lab pioneered a technique to study lungs as they are made to breathe. On a custom-built ventilator designed in their lab, the researchers imitated both natural and artificial breathing. Then, they observed isolated lungs involved in both types of breathing using multiple cameras collecting fast, high-resolution images, a method called digital image correlation.

“Our setup allows us to imitate both physiological and artificial breathing on the same lung with the switch of a button,” Eskandari said. “The unique combination of our ventilator with digital image correlation gives us unprecedented insights into the way specific regions of the lungs work in concert with the whole.”

Using their innovative method to interface these two systems, UCR researchers collected evidence demonstrating that natural breathing stretches certain parts of the lung as little as 25% while those same regions stretch to as much as 60% when on a ventilator.

Scholars traditionally model the lungs like balloons, or what they refer to as thin-walled pressure vessels, where pushing air in and pulling air out are understood to be mechanically equivalent.

To explain what they observed in this study, the researchers propose moving away from thin-walled pressure vessel models and instead towards thick-walled models. Unlike thin-walled pressure vessels theory, a thick-walled model accounts for the differing levels of stress in airways resulting from ventilators pushing air in versus natural breathing, which pulls air in. This helps to explain how airways are more engaged and air is more evenly distributed in the lung during physiological breathing.

Iron lungs, the gigantic ventilators used during the late 1940s polio outbreak, acted more like a human chest cavity, expanding the lung as it naturally would. This creates a vacuum effect that pulls air into the lungs. Though this action is gentler for the lungs, these bulky systems prevented easy access to monitoring other organs in hospital care.

By contrast, modern ventilators are more portable and easier for caretakers to work with. However, they push air into the lungs that is not evenly distributed, overstretching some parts and causing a decline in lung health over time.

While it is unlikely that hospitals will return to the iron lung models, it is possible that modern machines can be altered to reduce injury.

“Now that we know about excessive strain when air is delivered to the lungs, the question for us becomes about how we can improve ventilation strategies by emulating natural breathing,” Eskandari said.

The unintended consequences of using a ventilator 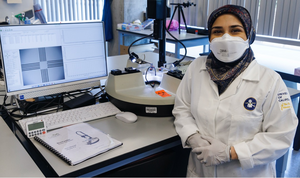