All chemical elements were formed in the process of evolution of the Universe dominated by light atomic nuclei. The properties of these nuclei are therefore of crucial importance not only in astrophysics, but also in relation to our everyday life. Our knowledge of light atomic nuclei has just been expanded thanks to accelerator studies conducted in Cracow on the specific excited states of carbon-13 nuclei.

The precise observation of phenomena occurring in atomic nuclei, especially of high-energy states, is an extremely difficult task from both technical and theoretical aspects. However, there are varieties of high-lying excitations of atomic nuclei that, due to their specific structure, can be observed and interpreted with a high accuracy. A team of physicists from Poland, Italy, France, Belgium, the Netherlands, Germany and Romania conducted a series of measurements of such states at Cyclotron Centre Bronowice in Cracow, where a beam of protons from the accelerator was collimated on carbon-13 targets. The researchers reported the results in a paper published in Physics Letters B.

“Our latest result concerns a special type of excitation of carbon-13 atomic nuclei. These excitations, known as ‘stretched‘ resonant states, attract the interest of physicists, especially astrophysicists, for many reasons. The consequence of the current successful experiment will be a series of further measurements aimed at extending our knowledge of the properties of atomic nuclei of other light isotopes,” says Prof. Bogdan Fornal, who, together with Prof. Silvia Leoni of Universita degli Studi di Milano and INFN Sezione di Milano in Italy, proposed this research topic.

The behaviour of atomic nuclei excited to high energies is extremely difficult to observe because the particles that make up the nuclei enter into complex interactions involving as many as three of the four types of forces found in nature: strong, weak and electromagnetic. In this context, among the main advantages of the stretched energy states of light atomic nuclei is the relative simplicity of their theoretical description, making it possible to build models that amply illustrate the measurement results. The excellent compliance between theory and experience is proof that the knowledge gained from observations of stretched nuclear states should be considered reliable.

“A nucleus in the energy state called stretched can be imagined as a system in which, under the influence of a collision with a proton from outside, only one proton or one neutron of the nucleus overcomes the energy gap and moves to an energy state in the so-called energy continuum,” explains Dr. Natalia Cieplicka-Orynczak (IFJ PAN), after which she specifies: “In the continuum, different energy states of the nucleus can overlap, which radically hinders the description of the phenomena taking place and their understanding, and consequently also the interpretation of data from experiments. Stretched states are therefore so important because, on the energy ladder of energy shells in the atomic nucleus, they are one of the highest places where relatively simple yet precise observations can still be made.”

In the experiment described here, the Proteus C-235 cyclotron in Cracow was used to accelerate protons. The beam emitted from it was focused on carbon targets prepared at the National Institute for Physics and Nuclear Engineering in Bucharest. Protons emitted during collisions of the beam with the target were recorded using the KRATTA measurement system, consisting of six arrays of telescopic detectors. The detectors were arranged concentrically around the axis of the proton beam, so that they recorded primarily protons emitted at an angle of 36 degrees to the beam. This is because theoretical analyses indicated that it was in the vicinity of this angle that the maximum emission of scattered protons associated with the stretched states of carbon-13 should be visible. Furthermore, gamma quanta and charged particles emitted during the decays of the examined resonance were recorded with the system of 23 other detectors, including the modern PARIS detection system and the DSSSD particle detector.

Thanks to measurements at the Cracow cyclotron, funded by the Polish National Science Centre, it was possible to directly establish that the carbon-13 nucleus from the stretched state being studied decays through two basic channels. In the channel occurring most frequently, the nucleus emits a proton and transforms into the excited boron-12, which then emits a gamma quantum. In the second channel, carbon-12 is formed, accompanied by the emission of a neutron (which, however, was not recorded in the experiment) and a gamma quantum.

Due to the importance of the research for understanding various nuclear processes, the series of experiments at the Cyclotron Centre Bronowice of the IFJ PAN will be continued. The atomic nuclei of nitrogen-14 and carbon-12 will now become the objects of interest to physicists. In the near future, an attempt will also be made to find extended nuclear states in boron-11, the existence of which has not yet been clearly documented.

The Henryk Niewodniczański Institute of Nuclear Physics (IFJ PAN) is currently one of the largest research institutes of the Polish Academy of Sciences. A wide range of research carried out at IFJ PAN covers basic and applied studies, from particle physics and astrophysics, through hadron physics, high-, medium-, and low-energy nuclear physics, condensed matter physics (including materials engineering), to various applications of nuclear physics in interdisciplinary research, covering medical physics, dosimetry, radiation and environmental biology, environmental protection, and other related disciplines. The average yearly publication output of IFJ PAN includes over 600 scientific papers in high-impact international journals. Each year the Institute hosts about 20 international and national scientific conferences. One of the most important facilities of the Institute is the Cyclotron Centre Bronowice (CCB), which is an infrastructure unique in Central Europe, serving as a clinical and research centre in the field of medical and nuclear physics. In addition, IFJ PAN runs four accredited research and measurement laboratories. IFJ PAN is a member of the Marian Smoluchowski Kraków Research Consortium: "Matter-Energy-Future", which in the years 2012-2017 enjoyed the status of the Leading National Research Centre (KNOW) in physics. In 2017, the European Commission granted the Institute the HR Excellence in Research award. As a result of the categorization of the Ministry of Education and Science, the Institute has been classified into the A+ category (the highest scientific category in Poland) in the field of physical sciences.

“The decay of the 21.47-MeV stretched resonance in 13C: A precise probe of the open nuclear quantum system description”

Preparations for the experiment with stretched nuclear states at the Cyclotron Centre Bronowice IFJ PAN in Cracow. Circular carbon disks can be seen on the right. Pictured is Sara Ziliani (University of Milan), one of the co-authors of the research. (Source: IFJ PAN)

“The decay of the 21.47-MeV stretched resonance in 13C: A precise probe of the open nuclear quantum system description”

‘Stretched’ nuclear states under the magnifying glass at the Cracow cyclotron 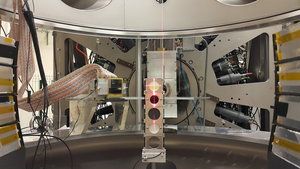 Calibration of the measurement system at the CCB IFJ PAN