The invasive spotted wing drosophila (SWD), introduced from South-East Asia, is a well-known fruit crop pest. It lays its eggs by destroying the mechanical protection of the fruit’s skin, providing an entry point for further infestation. Egg deposition and inoculated microbes then accelerate decay, and as a result the fruit rots and becomes inedible. While this small fly is known to cause massive economic damage in agriculture, little is known about its ecological impact on more natural ecosystems such as forests.

A recent study by Swiss scientists from the Swiss Federal Institute for Forest, Snow and Landscape Research WSL and the Ökobüro Biotopia, published in the scientific journal NeoBiota, concluded that the SWD competes strongly with other fruit-eating species and that its presence could have far-reaching consequences for ecosystems.

The research team assessed the use of potential host plants at 64 sites in forests from mid-June to mid-October 2020 by checking a total of 12,000 fruits for SWD egg deposits. To determine if SWD attacks trigger fruit decay, they also recorded symptoms of fruit decay after egg deposition. In addition, they monitored the fruit fly (drosophilid) fauna in the area, assuming that the SWD would outnumber and possibly outcompete other fruit-eating insects.

The authors found egg deposits on the fruits of 31 of the 39 fruit-bearing forest plant species they studied, with 18 species showing an attack rate of more than 50%. Furthermore, more than 50% of the affected plant species showed severe symptoms of decay after egg deposition. The egg depositions may alter the attractiveness of fruits, because they change their chemical composition and visual cues, such as colour, shape and reflective patterns, which in turn might lead seed dispersers such as birds to consume less fruits.

Given the large number of infested fruits, significant ecological impacts can be expected. “Rapid decay of fruits attacked by the spotted wing drosophila results in a loss of fruit available for other species competing for this resource, and may disrupt seed-dispersal mutualisms due to reduced consumption of fruit by dispersers such as birds,” says Prof. Martin M. Gossner, entomologist at the WSL. “If the fly reproduces in large numbers, both seed dispersers and plants could suffer.”

The authors further found that SWD were strongly represented and dominant in trap catches, and showed that the more abundant SWD were, the less abundant native drosophilids were. This suggests additional negative impacts of the invasive species on native communities.

With ongoing climate change, these potentially severe ecological impacts might be amplified in temperate forests, as higher average and winter temperatures will most likely lead to shorter generation times and lower winter mortality, which will eventually further increase the pressure on forest fruits and the competitiveness of the SWD over native drosophilids, the authors note. 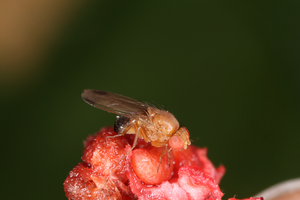 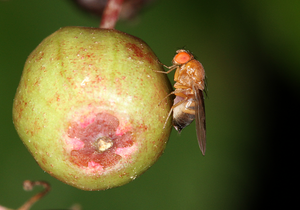