In order to push the performance of optical systems, aspheric- and freeform surfaces are used in state-of-the-art optic design for correcting aberrations. The production of these complex-shaped surfaces requires measuring the surface deviation from the nominal design. There are a lot of optical measurement methods, such as pointwise and stitching methods. Other solutions, such as shearing-based measurement systems, do not measure topography but determine the surface gradient. Direct, fast topography measurements with high precision are possible with full-field interferometric methods. They contain a reference and a measurement wavefront which interfere with a camera chip. The surface deviation can be calculated from the phase difference between the two wavefronts. Due to different beam paths, vibrations and temporal environmental effects like temperature or air fluctuations strongly influence the measurements' uncertainty. These effects are inherently reduced in common path interferometers, such as the widely used Fizeau-type interferometer.

In a new paper published in Light: Advanced Manufacturing, a team of scientists from the University of Stuttgart have presented a new approach to Tilted Wave Interferometry. Their paper, titled "Tilted Wave Fizeau Interferometer for flexible and robust asphere and freeform testing," showed an improvement of one order of magnitude compared to classical approaches.

Compensation optics such as computer-generated holograms (CGH) are state-of-the-art for measuring non-spherical optics. However, they require a new compensation element for each new type of surface under test (SUT). When measuring surfaces with significant deviations from the reference shape, interference fringes with high fringe densities and retrace errors occur. If the deviation becomes too high, vignetting of the measurement light produces unmeasurable areas of the surface under test. All these effects limit the classical Fizeau interferometer when complex-shaped surfaces are measured.

The Tilted Wave Interferometer (TWI) was invented at the University of Stuttgart to overcome these issues. It uses a grid array of light sources for off-axis illumination of the SUT. The different sources and the reference wavefront generate multiple sub-interferograms on the camera chip. The tilted wavefronts' tilt angles locally compensate for the effect of the gradient of the SUT.

A sophisticated volume calibration and evaluation method are used to subtract systematic errors to treat retrace errors numerically. Combining the TWI principle with the Fizeau common path interferometer is not straightforward. Every off-axis illumination source generates a reference wave reflected from the Fizeau surface. It leads to overlapping wavefronts on the detector, which makes it impossible to evaluate the interferograms.

There is a fiber switch-based Fizeau-type interferometer with switchable off-axis illumination. However, no analysis of the influence of the multiple interference effects between sub-interferograms has been reported yet.

This paper's main contribution is the realization of the new common path Tilted Wave Fizeau Interferometer that overcomes the reference wave problem. It combines the robust, well-established Fizeau interferometer technique with greatly enhanced flexibility and short tilted wave interferometry measurement time. The researchers found a new tool that addresses the urgent metrology needs for advanced optics fabrication. It included a detailed description of the multiple beam interference problem, followed by the mathematical description of the new calibration algorithm. The results section presented benchmarks and comparisons to the classical Twyman-Green TWI. 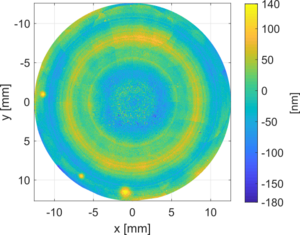 Measurement result of an asphere.