Lithium niobite (LN) with an ultra-wide optical transparent window has shown excellent nonlinear, electro-optic, acoustic-optic, piezoelectric, thermoelectric and photorefractive effects. It is an excellent platform for realizing χ(2) nonlinear photonic devices with low power consumption and high efficiency. However, phase matching condition among the nonlinear interacting optical fields and advanced nanofabrication techniques are required to realize high-performance LN nonlinear devices. On the one hand, an etchless LN waveguide structure, based on bound states in the continuum (BIC), has been proposed to simplify the nanofabrication process. On the other hand, most of the modal phase matching (MPM) processes suffer from the significant mode profile disparities between the fundamental frequency (FF) and the second harmonic (SH) waves, resulting in a small or even vanishing nonlinear modal overlap and consequently limiting the conversion efficiency. Alternatively, quasi-phase matching can be achieved by periodic poling of LN waveguides to maximize the nonlinear modal overlap, but the poling process is technologically nontrivial.

Bound propagation modes of the device were guided by a patterned low-refractive-index (LRI) waveguide but confined in a high refractive SiN/LN thin films. Since TM-like modes are immersed in the high-loss continuous TE-like modes, it will encounter propagation loss due to its coupling with TE-like modes. However, by carefully designing octave-separating BICs for the nonlinear interacting TM modes in such a hybrid structure, one can largely decrease the propagation losses of both FF and SH waves. In addition, the efficient second-harmonic generation (SHG) not only requires phase matching between the FF and SH modes, but also depends on their nonlinear modal overlap integrals. In the nonlinear conversion between the FF TM00 mode at the telecom band and the SH TM01 mode at the visible band, the nonlinear overlapping integral is not zero any more due to the vanishing χ(2) of SiN, which could achieve a theoretical normalized conversion efficiency of 327% W-1cm-2.

Such devices can be fabricated by simple procedures. Firstly, a SiN layer of similar thickness is deposited on the LN thin film. Then a LRI waveguide structure is fabricated by electron-beam lithography on top of the SiN layer, as shown in Fig. 2a. the processes of etching and ferroelectric domain poling are not involved. A fiber-coupled optical system shown in Fig. 2b is used to characterize the SHG. Figure 2c shows the relationship between the SH intensity and the FF wavelength, which proves the existence of the MPM process. Fixing the FF wavelength at the phase matching point of 1570 nm, the power dependence of SH wave is measured, as shown in Fig. 2d. The on-chip normalized conversion efficiency of the device is calculated to be 4.05% W-1cm-2.

This work provides a versatile and fabrication-friendly platform to study on-chip nonlinear optical processes with high efficiency in the context of nanophotonics and quantum optics, and explore new nonlinear physical phenomena, such as non-Hermitian systems, nonlinear topologies, etc. 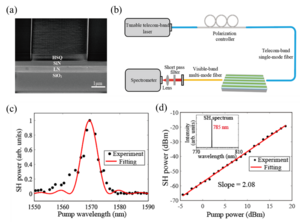