Subduction zones, where one tectonic plate slides beneath another, produce the most devastating seismic, volcanic, and landslide hazards on the planet. A new report presents an ambitious plan to make major advances in understanding subduction zone hazards by bringing together a diverse community of scientists in a long-term collaborative effort, deploying new instrumentation in subduction zones, and developing more sophisticated and accurate models.

The report from the Subduction Zones in Four Dimensions (SZ4D) Research Coordination Network has been years in the making. After a 2016 workshop produced a “Vision Document” for the initiative, the National Science Foundation (NSF) funded the Research Coordination Network to develop a detailed plan. Through a series of meetings, workshops, webinars, and town halls to engage the U.S. research community and solicit input, the SZ4D initiative identified community priorities and the key infrastructure requirements and science activities needed to better understand geohazards and reduce their risks to society.

The implementation plan presented in the new report will inform ongoing discussions with NSF and other agencies regarding funding for the initiative.

“It’s been a huge community effort,” said Emily Brodsky, professor of Earth and planetary sciences at UC Santa Cruz and chair of the SZ4D steering committee. “This is the right time to put serious resources into the question of whether these events are predictable or not. That’s something we’re poised to address now.”

Subduction zones are found around the world, mostly in coastal regions where an oceanic plate dives beneath a continental plate. The resulting geohazards include the largest earthquakes and tsunamis, active chains of volcanoes, and large landslides. Many large population centers are situated along subduction zones and are vulnerable to these hazards.

In the United States, the greatest risk is associated with the Cascadia subduction zone off the coast of the Pacific Northwest. According to Brodsky, however, Cascadia is not the best place to concentrate research efforts because it moves so slowly. The Chilean subduction zone is geologically active enough to provide useful information and is a good locale for comparative studies with Cascadia and Alaska. The SZ4D implementation plan recommends deploying instruments at all three sites, but with most of the observational efforts in Chile (70% of the instrumentation), along with a substantial portfolio of scientific activities in Cascadia and Alaska.

“We want to be able to translate what we learn in Chile to Cascadia and Alaska,” Brodsky explained. She said the initiative has already begun building partnerships with Chilean scientists and international groups studying the subduction zone there.

The implementation plan involves a major effort to improve observations of subduction zones in a systematic way, collecting a diverse set of measurements at a range of temporal and spatial scales both on land and under the sea. The infrastructure required for this includes extensive arrays of instruments to monitor different facets of subduction zone behavior as well as volcanoes and surface and environmental conditions related to landslides. In addition, the plan calls for researchers to study the geologic context, conduct laboratory experiments, and build computational models that integrate field observations and laboratory data.

The plan also emphasizes the need for close coordination among all components and deep integration throughout the program. The initiative brings together a diverse community of scientists and stakeholders with a wide range of geoscience backgrounds and expertise related to earthquakes, volcanoes, and surface processes.

“It’s a complicated problem, and solving it requires stitching together a lot of different pieces. It’s not enough for individual scientists to focus on their individual pieces,” Brodsky said. “We need the infrastructure and the science, as well as the organizational structure to integrate all the pieces of the puzzle.”

Major advances in understanding the science behind subduction zone hazards could yield tangible benefits for communities in the affected regions, including the possibility of useful forecasts of large earthquakes, volcanic eruptions, and landslides.

“We’re not promising that we will be able to predict anything, but we need to figure out if our inability to predict these things is related to the fundamental properties of the system, or because we just haven’t had the instruments in the right place at the right time,” Brodsky said.

George Hilley at Stanford University served as lead editor of the report. The SZ4D initiative is organized into three working groups (Landscapes and Seascapes, Faulting and Earthquake Cycles, and Magmatic Drivers of Eruption) and two integrative groups (Building Equity and Capacity in Geoscience and Modeling Collaboratory for Subduction), with a total of 74 members from 55 universities and institutions. The next SZ4D Community Meeting will be held November 14 to 16 in Houston.

Additional information is available on the SZ4D website at www.sz4d.org. 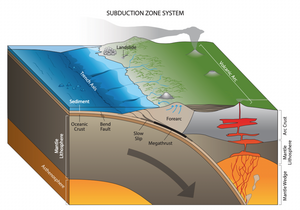