‘If no action is taken to better understand and reduce the impact of climate change on insects, we will drastically limit our chances of a sustainable future with healthy ecosystems.’ This warning in a very topical paper in Ecological Monographs comes from 70 scientists from 19 countries around the world. But, they also provide ways to help insects in a warming world complete with management strategies.

Yes, we’ve heard about insect decline before. But no, we haven’t done much to stop it on a worldwide scale. Climate change is at the top of the world’s to-do list. Something that coincides very well with the COP 27 climate change conference in Egypt from 6 - 18 November.

‘Climate change aggravates other human-mediated environmental problems,’ says Jeffrey Harvey from the Netherlands Institute of Ecology (NIOO-KNAW) and Vrije Universiteit Amsterdam. ‘Including habitat loss and fragmentation, various forms of pollution, overharvesting and invasive species.’ He leads the major paper by an international team of scientists. Together, they provide a convincing overview of the role of climate change and climatic extremes in driving insect decline.

The paper is part of the Scientists’ Warning series. ‘Insects play critical roles in so many ecosystems, but we are rapidly losing at least part of them,’ Harvey stresses the urgency. And this seems the case especially in temperate regions. The authors emphasise that both longer-term events and short-term extremes are harming insects in several ways.

Evidence of the effects is piling up, and it’s all presented in this review. For instance, fruit flies, butterflies and flour beetles can survive heat waves, but males or females become sterilised and thus unable to reproduce. They become ‘living dead’. Bumblebees in particular prove very sensitive to heat, and climate change is now considered the main factor in the decline of several North American species.

‘Cold-blooded insects are among the groups of organisms most seriously affected by climate change, because their body temperature and metabolism are strongly linked with the temperature of the surrounding air,’ says Harvey.

One major concern with insect decline in a warming world is that plants – on which insects depend for food and shelter – are similarly affected by climate change. And as insect numbers dwindle, it in turn works its way higher up the food chain. This has happened to many birds, for instance, over the past decades.

Think pollination, pest control, nutrient cycling and decomposition of waste. Insects represent the overwhelming bulk of biodiversity, and perform vitally important services that sustain human civilisation, all worth staggering amounts of money (billions of dollars) annually to the global economy. Another reason to act on climate change. Harvey: ‘The late renowned ant ecologist Edward O. Wilson, once argued that ‘it is the little things that run the world’. And they do!’

‘Over time, insects must adjust their seasonal life-cycles and distributions as the world warms,’ says Harvey. ‘However, their ability to do this is hindered by other human-caused threats such as habitat destruction and fragmentation, and pesticides.’ Furthermore, heatwaves and droughts can drastically harm insect populations in the short term, making insects less able to adapt to more gradual warming. ‘Warming over different time scales poses different kinds of threats to insects.’

Importantly, the scientists not only describe the problems, but also discuss a range of solutions and management strategies. These may help to buffer insects against climate warming. Individual people can help by caring for lots of different wild plants, providing food and areas where insects can shelter to ride out climate extremes. And by reducing the use of pesticides and other chemicals. ‘At the larger scale, we need to address climate change. Rewilding programmes also need to consider micro-scale ecosystems which focus on the conservation of small animals like insects.’

‘Insects are tough little critters and we should be relieved that there is still room to correct our mistakes,’ according to Harvey. But time is running out. ‘We really need to enact policies to stabilise the global climate. In the meantime, at both government and individual levels, we can all pitch in and make urban and rural landscapes more insect-friendly.’

With more than 200 staff members and students, the Netherlands Institute of Ecology (NIOO-KNAW) is one of the largest research institutes of the Royal Netherlands Academy of Arts and Sciences (KNAW). The institute specialises in water and land ecology with three major themes: biodiversity, climate change and the sustainable use of land and water. The institute is located in an innovative and sustainable research building in Wageningen, the Netherlands. NIOO has an impressive research history that stretches back more than 65 years and spans the entire country, and beyond.

‘Insects need our help in a warming world, now’ 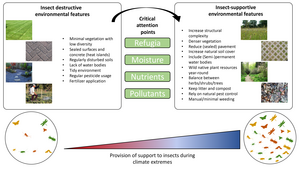 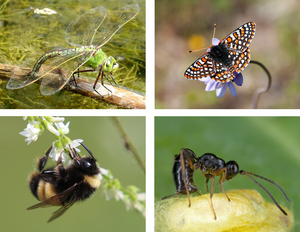