Using this software, research team carried out a series of studies on the accumulation mechanisms of displacement damage in iron (Fe) based nanostructured materials.

The results were published in Journal of Nuclear Materials.

Nanocrystalline Fe was found to exhibit improved radiation resistance. This benefits from the high density of grain boundaries (GBs) which serve as sinks for radiation induced vacancies (Vs) and self-interstitial atoms (SIAs). However, the previous multiscale simulations only focused on the basic atomic processes when exploring the microscopic mechanisms of defect-GB interactions, making it powerless to obtain the new physical processes that may be introduced by the accumulative damage.

The technology developed in this research can not only achieve the experimental radiation dose and dose rate, but also supplement and correct the existing atomic processes according to the radiation dose.

Researchers investigated the accumulation mechanisms of radiation defects at Fe GBs, mainly including the SIAs loading in GBs at a low temperature and its effects on the role of GBs under radiation.
The results suggested that the SIAs preferentially segregate to the GB at a high dose rate and/or a low temperature. With the increase of radiation dose, the SIAs accumulated at the GB become the structural components of the GB, and further make the GB recover to its background structure. Such process involves the transition of some excess SIAs to the minority of the Vs accompanied by a local motion of the GB. With the accumulation of SIAs, the role of the GB exhibits an alternating evolution from trapping Vs to annihilating Vs. When the new atomic processes were re-parameterized and incorporated into the original OKMC model, it was found that the concentration of SIAs at the GB and the concentration of Vs near the GB had an alternating trend of "increase-decrease", which is different from the original simulation result.

This study presented a cross-scale pattern for exploring the dynamic interaction mechanisms between radiation defects and GBs under accumulative radiation, and provided a mechanism reference for further optimizing the radiation resistance of polycrystalline materials based on GB engineering, according to the team. 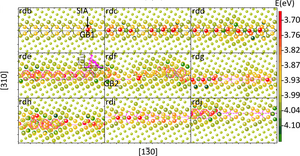 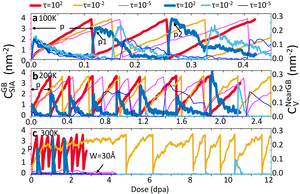