Montréal, November 8, 2022 — The type of virus used as a model to study the efficacy of non-neutralizing antibodies against the virus responsible for AIDS has a crucial role to play, according to a new study led by Andrés Finzi, Université de Montréal professor and researcher at the CHUM Research Centre.

Published in Cell Reports, the study shows for the first time in humanized mice that the expression of the viral protein Vpu is essential in allowing infected cells to evade the elimination mechanism known as antibody-dependent cell-mediated cytotoxicity (ADCC).

Among other things, this mechanism, well documented in the scientific literature, is used by non-neutralizing antibodies to get rid of cells infected by the virus.

To develop a vaccine against the human immunodeficiency virus, or HIV-1, many laboratories study the generation of this same category of antibodies to prevent infection.

Today, millions of people live with HIV-1 and have non-neutralizing antibodies. Still, the disease has yet to be eradicated. If the antibodies are so effective, why don’t they appear to work?

This conundrum was all it took to spark the curiosity of UdeM doctoral student Jérémie Prévost, the first author of the study and a team member under Finzi, the study’s lead author and a Canada Research Chair in Retroviral Entry.

“We observed that the modified HIV-1 virus used in certain laboratory experiments does not express Vpu,” said Finzi. “However, in the naturally occurring virus, this protein actually plays the role of a bodyguard for the infected cell. Once expressed, it allows it to replicate itself and helps it protect itself by flying under the immune system’s radar.”

In fact, the study headed by Prévost shows that, by expressing the Vpu protein in infected cells, non-neutralizing antibodies have a much more difficult time recognizing these cells in vivo. The latter thus evade the ADCC response.

Experiments conducted at Yale University School of Medicine by Finzi’s collaborator Priti Kumar in humanized mice that received non-neutralizing antibodies confirmed this observation. Only animals infected by a virus in which Vpu was not expressed saw their viral load drop, in contrast with those infected by a naturally occurring virus.

This observation echoes previous research work conducted by the team.

In 2013, Andrés Finzi’s team had already shown that infected cells are protected from the ADCC response because the viral envelope remains closed under the effect of Vpu and the protein Nef, a second bodyguard. Fully sheltered, the infected cell cannot be found by antibodies in the vicinity.

“In the laboratory, if Vpu is not expressed in the virus that you use, the envelope of the infected cell will open up,” said Finzi. “Without protection, it will be attacked by antibodies. This likely explains some surprising results reported with non-neutralizing antibodies. In real life, HIV is always on guard thanks to its two bodyguards, Vpu and Nef.”

The researcher and his team believe that the valuable information provided by this study should be taken into consideration in the development of future vaccines against HIV-1 and in strategies for eradicating the virus.

According to the World Health Organization, at the end of 2021 more than 38 million people were living with the virus that causes AIDS.

The CHUM Research Centre (CRCHUM) is one of North America’s leading hospital research centres. It strives to improve the health of adults through a continuum of research spanning disciplines such as basic science, clinical research and population health. More than 2,150 people work at the CRCHUM, including nearly 500 researchers and nearly 650 students and postdoctoral fellows. crchum.com

Deeply rooted in Montréal and dedicated to its international mission, Université de Montréal is one of the top universities in the French-speaking world. Founded in 1878, Université de Montréal today has 13 faculties and schools, and together with its two affiliated schools, HEC Montréal and Polytechnique Montréal, constitutes the largest centre of higher education and research in Quebec and one of the major centres in North America. It brings together 2,300 professors and researchers and has 70,000 students. umontreal.ca

A better understanding of how HIV-1 evades the immune system 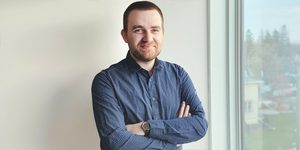 Université de Montréal doctoral student Jérémie Prévost, the first author of the study and a team member under Andrés Finzi