Pearl oysters are an important aquaculture animal in Japan, as they produce the beautiful pearls that are sought after for necklaces, earrings, and rings. In the early 1990s, this aquaculture industry was bringing in around 88bn yen annually. But, in the last 20 years, a combination of new diseases and red tides has seen production of Japan’s pearls drop from around 70,000kg a year to just 20,000kg. Now, researchers from the Okinawa Institute of Science and Technology (OIST), in collaboration with a number of other research institutes including K. MIKIMOTO & CO., LTＤ, Pearl Research Institute and Japan Fisheries Research and Education Agency, have constructed a high-quality, chromosome-scale genome of pearl oysters, which they hope can be used to find resilient strains. The research was published recently in DNA Research.

“It’s very important to establish the genome,” said one of the two first authors, Dr. Takeshi Takeuchi, staff scientist in OIST’s Marine Genomics Unit. “Genomes are the full set of an organism’s genes—many of which are essential for survival. With the complete gene sequence, we can do many experiments and answer questions around immunity and how the pearls form.”

In 2012, Dr. Takeuchi and his collaborators published a draft genome of the Japanese pearl oyster, Pinctada fucata, which was one of the first genomes assembled of a mollusk. They continued genome sequencing in order to establish a higher quality, chromosome-scale genome assembly.

Dr. Takeuchi went on to explain that the oyster’s genome is made up of 14 pairs of chromosomes, one set inherited from each parent. The two chromosomes of each pair carry nearly identical genes, but there can be subtle differences if a diverse gene repertoire benefits their survival.

In this study, the researchers decided not to merge the chromosomes when sequencing the genomes. Instead, they sequenced both sets of chromosomes—a method that is very uncommon. In fact, it’s probably the first research focused on marine invertebrates to use this method.

As pearl oysters have 14 pairs of chromosomes, they have 28 in total. OIST researchers Mr. Manabu Fujie and Ms. Mayumi Kawamitsu used state-of-the-art technology to sequence the genome. The other first author, Dr. Yoshihiko Suzuki, former Postdoctoral Scholar in OIST’s Algorithms for Ecological and Evolutionary Genomics and now at the University of Tokyo, and Dr. Takeuchi reconstructed all 28 chromosomes and found key differences between the two chromosomes of one pair—chromosome pair 9. Notably, many of these genes were related to immunity.

“Different genes on a pair of chromosomes is a significant find because the proteins can recognize different types of infectious diseases,” said Dr. Takeuchi.

He pointed out that when the animal is cultured, there is often a strain that has a higher rate of survival or produces more beautiful pearls. The farmers often breed two animals with this strain but that leads to inbreeding and reduces genetic diversity. The researchers found that after three consecutive inbreeding cycles, the genetic diversity was significantly reduced. If this reduced diversity occurs in the chromosome regions with genes related to immunity, it can impact the immunity of the animal.

“It is important to maintain the genome diversity in aquaculture populations,” concluded Dr. Takeuchi.

This research was supported by grants from the Project of the Bio-oriented Technology Research Advancement Institution, a special scheme project on advanced research and development for next-generation technology.

Comment by Prof. Shugo Watabe (Visiting Professor at the Kitasato University, professor emeritus at the University of Tokyo)

Cultured pearls were developed for the first time in the world 130 years ago by Kokichi Mikimoto in Japan. Even today, they are the second most exported marine product produced in Japan, after scallops. However, the history of pearl aquaculture in Japan has been a battle against diseases in the aquaculture environment. The damage caused by the red discoloration disease, which emerged in 1996, was particularly severe. The production of cultured pearls in Japan has declined significantly. In recent years, the pearl-farming industry is once again facing major problems due to the spread of diseases caused by viruses. Although the details of the causes of diseases and countermeasures have not been established, it has been pointed out that pearl cultivation in Japan may be suffering from genetic deterioration due to inbreeding of pearl oysters with superior traits, which makes it difficult to respond to various environmental changes and the emergence of pathogens. The findings of this research have shed light on this concern of pearl cultivation in Japan, and are of great industrial significance. Furthermore, many of the genes involved in the immune system have also been identified. This also provides insight into the mystery of pearl formation itself, as to why pearl oysters can form a nacreous layer in response to an externally introduced foreign object. Akoya pearls produced by Japanese pearl oysters attract people from all over the world with their unique and graceful luster, which is not seen in pearls produced from other pearl oyster species. The present study is expected to be the beginning of the genetic elucidation of this characteristic. 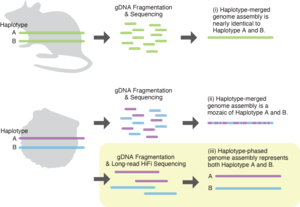 A representation of the genome assembly method