Geneva, Switzerland – The Wyss Center for Bio and Neuroengineering has revealed the latest pre-clinical neural data acquired with its fully implantable ABILITY brain-computer interface (BCI) system. The results, presented at the Society for Neuroscience 2022 meeting in San Diego, are accompanied by new details of the ABILITY system demonstrating its flexibility in connecting to different electrode types.

ABILITY, a wireless implantable medical device, is being developed by the Wyss Center team together with academic and clinical collaborators and a network of industrial technology partners.

Intended for long-term implantation and home use, ABILITY is designed to enable applications such as restoration of communication and movement for people with severe paralysis resulting from amyotrophic lateral sclerosis (ALS), brainstem stroke or spinal cord injury.

“These new results are an important step towards demonstrating safety and efficacy of the device while recording and transmitting neural data in real time over a period of months. The device performance and quality of the data are very encouraging as we prepare next steps towards human clinical trials,” said Shenandoah Montamat, MSc, who is managing the ABILITY project at the Wyss Center.

Two MEAs, each smaller than a pea, recorded the activity of individual neurons with an array of fine needles that penetrated the surface of the cortex. At this resolution it is possible to decode fine movement intention with high accuracy from very small brain areas. In a separate study, four ECoG grids, each about the size of a postage stamp, recorded signals from the surface of the cortex. ECoG electrodes cover a larger area of the brain than MEAs and measure the combined activity of nearby neurons with sufficient resolution to decode speech, in humans.

The ABILITY system records 128 channels of neural data at a frequency sufficiently high to observe communication between single neurons, known as action potentials, as well as the lower frequency synchronous activity of groups of neurons firing together, known as local field potentials. It wirelessly transmits the raw data through the skin using a high-speed optical link. Wearable components send the neural data to a computer with a wired connection. The wearable also wirelessly powers the implant through the skin via induction.

“The development of ABILITY draws on experience from a recent clinical case study that successfully enabled BCI communication for a person completely locked-in because of ALS,” says Jonas Zimmermann, PhD, Senior Neuroscientist at the Wyss Center.

In that study, the patient learned to modulate neural activity to control speller software. The system used a wired connection to transfer data between implanted electrodes and an external computer through a percutaneous connection in the scalp.

“The study highlights the clinical need for breakthrough implant technology to improve ease of use for patients and caregivers,” continues Zimmermann.

George Kouvas, MBA, Wyss Center Chief Technology Officer says: “At the Wyss Center we are addressing some of the major neuroscientific and engineering challenges that fully implantable brain-computer interfaces encounter during development. The result is a versatile technology like ABILITY that has the potential to help the BCI market grow.”

Human clinical trials are now being prepared to assess ABILITY system performance and understand the acceptance of implantable BCIs by patients, caregivers, and healthcare professionals.

Topics covered in this release will be presented at the Society for Neuroscience meeting in San Diego 12-16 November 2022.

Journalists attending the meeting are invited to see the ABILITY device in-situ on a skull and handle prototypes at booth number 3117 in the exhibition hall.

Saturday 12 November 4-5pm 059.08/U6 - Evolution of BCI performance over three years of recordings with intracortical microelectrode arrays in a complete locked-in syndrome patient

Saturday 12 November 2-3pm 059.10/U8 - Evolution of performance and signal quality during the long-term use of an intracortical BCI

Image captions: ABILITY is a fully implantable neural recording system designed to amplify and wirelessly transmit high channel count, high frequency neural data from the brain to a computer in order to restore communication and independence for people with severe paralysis. ©Wyss Center

The Wyss Center is an independent, non-profit, research and development organization that advances our understanding of the brain to realize therapies and improve lives.

The Wyss Center staff, together with the Center’s academic, clinical and industrial collaborators, pursue innovations and new approaches in neurobiology, neuroimaging and neurotechnology.

Wyss Center advances reveal unique insights into the mechanisms underlying the dynamics of the brain and the treatment of disease to accelerate the development of devices and therapies for unmet medical needs. 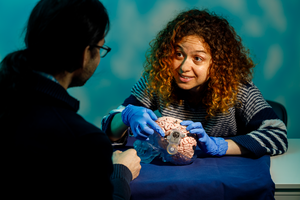 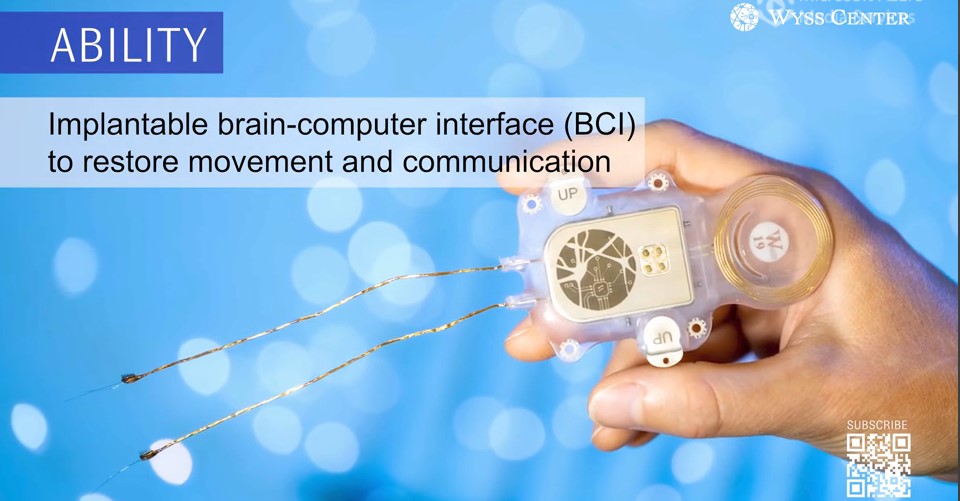