When it comes to preventing tick bites – especially in light of the dramatic, decade-long rise in tick-borne diseases – bug sprays help but are less than optimal.

For example, DEET was designed to keep quick-moving mosquitoes from landing on their host, where they bite and fly off in seconds. Ticks, on the other hand, don’t fly but rather ambush and then climb slowly up their host until they embed, feed and may remain for days.

“Unfortunately most repellants were developed for mosquitoes 75-plus years ago and not for ticks,” says vector-borne disease expert Stephen Rich, professor of microbiology at the University of Massachusetts Amherst and executive director of the UMass Amherst-based New England Center of Excellence in Vector-Borne Diseases (NEWVEC). “DEET, the gold standard, works fairly well, but a holy grail would be to have another repellency tool – not a contact repellent like DEET but a spatial repellent – that works as good as or better than DEET against ticks.”

Experiments at Rich’s Laboratory of Medical Zoology used a new controlled-release device developed by scientist-entrepreneur Noel Elman with funding from the Department of Defense’s medical research programs. Rich and colleagues tested the effects on ticks after releasing the synthetic pyrethroids transfluthrin and metofluthrin into a small, transparent chamber equipped with three vertical climbing sticks. Ticks don’t come in direct contact with the repellents but rather the active ingredients create more of a “force field” that alters and slows the ticks’ progress toward their target.

The results, published today, Nov. 8, in the journal PLOS ONE, found that the two spatial repellents were effective at changing the behavior of ticks, making them less likely to climb vertically and more likely to detach or fall off the stick.

“While we still have much work to do, these innovative findings prove the principle that these spatial repellents alter the behavior in ticks in a way we hope will lead to fewer tick bites,” says Rich, senior author.

The paper’s lead author, Eric Siegel, helped design the vision system that precisely tracked tick movement in the experiment chamber. “People throw the word ‘repellency’ around a lot, and we made it a goal to redefine repellency in tick protection and find ways to measure it,” says Siegel, a lab technician about to begin his Ph.D. studies in microbiology under Rich. “There’s so much we still don’t know about tick olfactory [smell] and gustatory [taste] mechanisms, and this was the biggest challenge in these experiments, as is the case overall in the development of protective products.”

“We were impressed with not just the repellency but the behavioral changes in the tick,” says co-author Elman, founder and CEO of GearJump Technologies, who received the DoD funding to design a controlled-release device that can attach to the boot of soldiers. Many of the ticks in the experiments became slower moving, less mobile and appeared to be in a “drunken-like state,” according to the paper.

Elman approached Rich a few years ago to design and run experiments using the device with various repellents. A next step is to conduct experiments with actual animal hosts.

“Repellents probably won’t stop ticks from getting on us,” Rich says. “We hope the repellents will help keep them from staying on us, and that’s where the battle lines really should be drawn.”

The researchers can envision a day when such devices will be commercially available to the general population.

Until then, the research will continue. “We still mostly don’t know how the chemicals we use work,” Siegel says. “When we do, we can develop and refine these measures in a more targeted way.”

Spatial repellents transfluthrin and metofluthrin affect the behavior of Dermacentor variabilis, Amblyomma americanum, and Ixodes scapularis in an in vitro vertical climb assay

Ticked off: New device may offer a better way to prevent tick bites 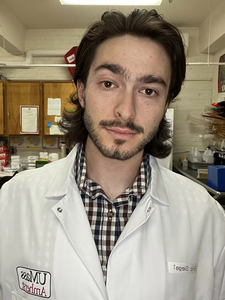