Demonstrating their patent-pending method, the model plant Arabidopsis accumulated 15 to 18 per cent more oil in its seeds when it was grown with the modified protein under laboratory conditions.

Finding ways to make crops yield more oil in their seeds is a holy grail for the farming industry. However, most oil-producing crops – such as oil palm, soybean, sunflower, rapeseed, peanut – already have a high percentage of oil in their fruit or seed, and it is hard to increase their oil content through traditional crop crossbreeding methods.

Vegetable oils are commonly used in food processing, biofuels, soaps and perfumes, and the global market for them is estimated to be worth US$241.4 billion in 2021 and is expected to increase to US$ 324.1 billion by 2027[1]. Increasing the yield of oil from plants could also help the world in its quest for sustainability, helping to reduce the amount of arable land needed for oil-yielding crops.

The secret to helping plants store more oil in their seeds is one of their proteins called WRINKLED1 (WRI1). Scientists have known for over two decades that WRI1 plays an important role in controlling plant seed oil production.

Now for the first time, a high-resolution structure of WRI1 has been imaged and reported by the NTU team, jointly led by Associate Professor Gao Yonggui and Assistant Professor Ma Wei from the School of Biological Sciences.

Published in the scientific journal Science Advances, the team detailed the molecular structure of WRI1 and how it binds to plant DNA – which signals to the plant how much oil to accumulate in its seeds.

Based on the understanding that the atomic structure of the WRI1-DNA complex revealed, the team modified WRI1 to enhance its affinity for DNA in a bid to improve oil yield. In this approach, some portions in WRI1 were selected for modifications to improve its binding to DNA and several forms of WRI1 were produced.

These candidate WRI1s were then further tested to assess their ability to activate oil production in plant cells. As expected by the team, they showed that their modified versions of WRI1 increased DNA binding ten-fold compared to the original WRI1 – ultimately leading to more oil content in its seeds.

Assoc Prof Gao, a structural biologist said: “Being able to see exactly what WRI1 looks like and how it binds to DNA that is responsible for oil production in the plant was the key to understanding the entire process. WRI1 is an essential regulator that informs the plant how much oil to store in its seeds. Once we were able to visualise the ‘lock’, we then engineered the ‘key’ that can unlock the potential of WRI1.”

Analysing at the atomic level, the crystal structure of the WRI1 protein and the double helix DNA strands to which it binds, the team noticed this DNA binding domain was extensively conserved. This means that there were little to no variations, suggesting it could be a common binding mechanism for many plant species.

Using this crystal structure of WRI1 as the ‘target’, the team then looked to modify WRI1, to enhance the binding affinity of the protein for its target DNA. The instructions for coding this modified WRI1 protein are then introduced into the target plant cells, after which the plant will use this new ‘set of instructions’ whenever it produces WRI1.

In lab experiments to observe how the modified WRI1 affects oil accumulation, both the modified protein and the unmodified form were injected into Nicotiana benthamiana leaves, and an analysis of triacylglycerol (a major form of dietary lipid in fats and oils) levels was carried out. The modified WRI1 protein generated more significant spikes in triacylglycerol production compared to the control plant introduced with the WRI1 unmodified form.

Subsequent experiments showed that the oil content in the seeds of the modified Arabidopsis thaliana contained more oil than the unmodified form. The offspring of this genetically modified plant will also bear the same modified WRI1 protein and produce more oil in their seeds.

Asst Prof Ma, a plant molecular biologist who has been studying WRI1 since his postdoctoral training, said modifying WRI1 to improve its binding to DNA was a logical move for the team.

“We know that WRI1 is a protein that binds to a plant’s DNA sequence and sets off a specific chain of instructions that regulates the accumulation of oils in the seeds. The stronger the binding – the more oil the plant will concentrate in its seeds. Therefore, we chose to improve this portion of WRI1 that binds to its target DNA, which is highly conserved across many seed-bearing plants. Being highly conserved means many species of plants will have the exact same mechanism that can be modified, so we should be able to translate our oil-yielding modification easily to many different types of crops in future.” Asst Prof Ma explained.

"Plant seed oil is vital for the human diet and is used in many important industrial applications. Global demand for plant oil is increasing very quickly and our research contributes to efforts to improve seed oil production in a sustainable manner, and potentially reducing the environmental impact of agriculture." Asst Prof Ma added.

Moving forward, the team has filed a patent for their method of gene modification through NTUitive, the University’s innovation and enterprise office, and is looking for industry partners to commercialise their invention.

This research is aligned with the NTU2025 strategic plan and the University’s Sustainability Manifesto, where it aims to research and develop new technologies towards a greener future.

Giving an independent expert comment, Michael Fam Chair Professor William Chen, Director of Food Science & Technology Programme at NTU, said there are a few ways to tackle world hunger, including by increasing the amount of food produced or increasing the calories and nutritional value of the food produced.

“In a world that has limited arable land for agriculture, advanced technologies to grow more food with higher nutrition value is required if we hope to tackle world hunger. When we can increase the fat content in edible seeds and nuts, a person can eat a lesser amount but still feel full, due to the increase in calories consumed,” said Prof Chen, a renowned food security expert who was not involved in this study.

“So instead of growing more crops to feed more people, we should also look at methods where the crops grown have more calories and nutrition, so that the same amount of food can feed more people.”

The NTU study is supported by Ministry of Education (MOE) of Singapore Tier 1 and Tier 2 grants, which usually awards research projects on a competitive basis up to $200,000 and $1 million respectively. 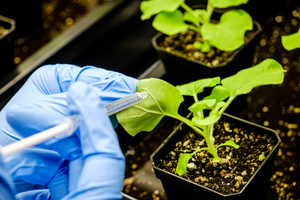 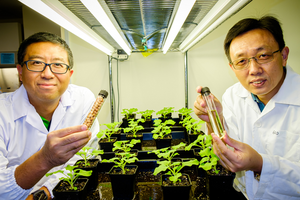