But new computer simulations show that one driver of annual weather cycles in that region — in particular, a cold tongue of surface waters stretching westward along the equator from the coast of South America — has gone unrecognized: the changing distance between Earth and the sun.

The cold tongue, in turn, influences the El Niño-Southern Oscillation (ENSO), which impacts weather in California, much of North America, and often globally.

The Earth-sun distance slowly varies over the course of the year because Earth’s orbit is slightly elliptical. Currently, at its closest approach — perihelion — Earth is about 3 million miles closer to the sun than at its farthest point, or aphelion. As a result, sunlight is about 7% more intense at perihelion than at aphelion.

Because the period of the annual cycle arising from the tilt and distance effects are slightly different, their combined effects vary over time, said lead researcher John Chiang, UC Berkeley professor of geography.

“The curious thing is that the annual cycle from the distance effect is slightly longer than that for tilt — around 25 minutes, currently — so over a span of about 11,000 years, the two annual cycles go from being in phase to out of phase, and the net seasonality undergoes a remarkable change, as a result,” Chiang said.

Chiang noted that the distance effect is already incorporated into climate models — though its effect on the equatorial Pacific was not recognized until now — and his findings will not alter weather predictions or climate projections. But the 22,000-year phase cycle may have had long-term, historical effects. Earth’s orbital precession is known to have affected the timing of the ice ages, for example.

The distance effect — and its 22,000-year variation — also may affect other weather systems on Earth. The ENSO, which also originates in the equatorial Pacific, is likely affected because its workings are closely tied to the seasonal cycle of the cold tongue.

“Theory tells us that the seasonal cycle of the cold tongue plays a key role in the development and termination of ENSO events,” said Alyssa Atwood, a former UC Berkeley postdoctoral fellow who is now an assistant professor at Florida State University in Tallahassee. “Because of this, many of ENSO’s key characteristics are synced to the seasonal cycle.”

For example, ENSO events tend to peak during Northern Hemisphere winters, she said, and they don’t typically persist beyond northern or boreal spring months, which scientists refer to as the “spring predictability barrier.” Because of these linkages, it is reasonable to expect that the distance effect could also have a major impact on ENSO — something that should be examined in future studies.

“Very little attention has been paid to the cold tongue seasonal cycle because most people think it's solved. There's nothing interesting there,” Chiang said. “What this research shows is that it's not solved. There's still a mystery there. Our result also begs the question whether other regions on Earth may also have a significant distance effect contribution to their seasonal cycle.”

“We learn in science classes as early as grade school that the seasons are caused by the tilt of Earth’s axis,” added co-author Anthony Broccoli of Rutgers University. “This is certainly true and has been well understood for centuries. Although the effect of the Earth-sun distance has also been recognized, our study indicates that this ‘distance effect’ may be a more important effect on climate than had been recognized previously.”

Chiang, Atwood and Broccoli and their colleagues reported their findings today in the journal Nature.

The main driver of global weather changes is seasonal change. Earth’s equator is tilted relative to its orbit around the sun, so the Northern and Southern hemispheres are illuminated differently. When the sun shines directly overhead in the north, it’s warmer in the north and colder in the south, and vice versa.

These yearly changes have major effects on the Pacific equatorial trade winds, which blow from southeast to northwest across the south and equatorial Pacific and push surface waters westward, causing upwelling of cold water along the equator that creates a tongue of cold surface water that stretches from Ecuador across the Pacific — almost one-quarter the circumference of the planet.

The yearly hemispheric changes in seasonal temperature alters the strength of the trades, and thus cause a yearly cycle in the temperature of the cold tongue. This, in turn, has a major influence on ENSO, which typically peaks during Northern Hemisphere winter.

The occurrence of El Niño — or its opposite, La Niña — helps determines whether California and the West Coast will have a wet or dry winter, but also whether the Midwest and parts of Asia will have rain or drought.

“In studying past climates, much effort has been dedicated to trying to understand if variability in the tropical Pacific Ocean — that is, the El Niño/La Niña cycle — has changed in the past,” Broccoli said. “We chose to focus instead on the yearly cycle of ocean temperatures in the eastern Pacific cold tongue. Our study found that the timing of perihelion — that is, the point at which the earth is closest to the sun — has an important influence on climate in the tropical Pacific."

“Our field is focused on El Niño, and we thought that the seasonal cycle was solved. But then we realized that the result by Erb and Broccoli challenged this assumption,” he said.

Chiang and his colleagues, including Broccoli and Atwood, examined similar simulations using four different climate models and confirmed the result. But the team went further to show how the distance effect works.

The key distinction is that changes in the sun’s distance from Earth don’t affect the Northern and Southern hemispheres differently, which is what gives rise to the seasonal effect due to Earth’s axial tilt. Instead, they warm the eastern “continental hemisphere” dominated by the North and South American and African and Eurasian landmasses, more than it warms the Western Hemisphere — what he calls the marine hemisphere, because it is dominated by the Pacific Ocean.

“The traditional way of thinking about monsoons is that the Northern Hemisphere warms up relative to the Southern Hemisphere, generating winds onto land that bring monsoon rains,” Chiang said. “But here, we’re actually talking about east-west, not north-south, temperature differences that cause the winds. The distance effect is operating through the same mechanism as the seasonal monsoon rains, but the wind changes are coming from this east-west monsoon.”

The winds generated by this differential heating of the marine and continental hemispheres alter the yearly variation of the easterly trades in the western equatorial Pacific, and thereby the cold tongue.

“When Earth is closest to the sun, these winds are strong. In the offseason, when the sun is at its furthest, these winds become weak,” Chiang said. “Those wind changes are then propagated to the Eastern Pacific through the thermocline, and basically it drives an annual cycle of the cold tongue, as a result.”

Though Chiang and his colleagues did not examine the effect of such a cancellation, this would potentially have had a worldwide effect on weather patterns.

Chiang emphasized that the distance effect on climate, while clear in climate model simulations, would not be evident from observations because it cannot be readily distinguished from the tilt effect.

“This study is purely model based. So, it is a prediction,” he said. “But this behavior is reproduced by a number of different models, at least four. And what we did in this study is to explain why this happens. And in the process, we've discovered another annual cycle of the cold tongue that's driven by Earth's eccentricity.”

Atwood noted that, unlike the robust changes to the cold tongue seasonal cycle, changes to ENSO tend to be model-dependent.

“While ENSO remains a challenge for climate models, we can look beyond climate model simulations to the paleoclimate record to investigate the connection between changes in the annual cycle of the cold tongue and ENSO in the past,” she said. “To date, paleoclimate records from the tropical Pacific have largely been interpreted in terms of past changes in ENSO, but our study underscores the need to separate changes in the cold tongue annual cycle from changes in ENSO.”

Chiang’s colleagues, in addition to Broccoli and Atwood, are Daniel Vimont of the University of Wisconsin in Madison; former UC Berkeley undergraduate Paul Nicknish, now a graduate student at the Massachusetts Institute of Technology; William Roberts of Northumbria University in Newcastle-upon-Tyne in the United Kingdom; and Clay Tabor of the University of Connecticut in Storrs. Chiang conducted part of the research while on sabbatical at the Research Institute for Environmental Changes of the Academia Sinica in Taipei, Taiwan.

Earth-sun distance dramatically alters seasons in the equatorial Pacific in a 22,000-year cycle 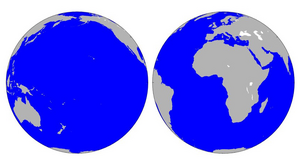