A chemical sensor endowed with artificial intelligence can learn to detect certain gases in the air with high sensitivity and selectivity. The device, developed at KAUST, uses machine learning to differentiate the gases according to the way they induce slight temperature changes in the sensor as they interact with it.

Smart electronic sensors that can detect specific airborne molecules are in great demand for use in applications from medical diagnostics to the detection of dangerous industrial gas leaks. The challenge is to accurately detect the target gas among the complex mixture of chemicals typically found in the air, says Usman Yaqoob, a postdoc in the labs of Mohammad Younis, who led the research. “Existing sensing technologies still suffer from cross-sensitivity,” Yaqoob says.

Rather than turn to exotic materials or special coatings to try to improve sensor selectivity, the team is applying machine learning. On the hardware side, the heart of the device is a heated strip of silicon called a microbeam resonator. When the microbeam is clamped at both ends, so that it is bent almost to buckling point, the frequency at which the microbeam resonates is very responsive to changes in temperature.

“When operated near buckling point, the heated microbeam shows significant sensitivity to different gases when they have a heat conductivity lower or higher than air,” Yaqoob says. Gases with a higher thermal conductivity than air, such as helium and hydrogen, cool the microbeam, which increases its stiffness and its resonance frequency. Gases such as argon, with a lower thermal conductivity, have the opposite effect. “The shift in resonance frequency is detected using a microsystem analyzer vibrometer,” Yaqoob says.

The team then used artificial intelligence to analyze the data and identify characteristic changes in resonance frequency corresponding to the different gases. “Data processing and machine learning algorithms are used to generate unique signature markers for each tested gas to develop an accurate and selective gas classification model,” Yaqoob says. Once trained on data from the sensor’s response to helium, argon and CO2, the algorithm could then identify these gases with 100 percent accuracy in an unknown dataset.

“Unlike traditional gas sensors, our sensor does not require any special coating, which enhances the chemical stability of the device and also makes it scalable,” Younis says. “You can scale the device down to the nano-regime without affecting its performance since it does need a big surface for the coating,” he says. 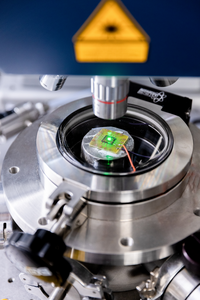