For the first time in its eight years orbiting Mars, NASA’s MAVEN mission witnessed two different types of ultraviolet aurorae simultaneously, the result of solar storms that began on Aug. 27.

MAVEN – the Mars Atmosphere and Volatile Evolution mission – is the only asset at Mars able to observe the Sun’s activity and the response of the thin Martian atmosphere at the same time. Real-time analysis and simulations of the solar eruptions from NASA’s Moon to Mars Space Weather Analysis Office also allowed the MAVEN team to correctly predict when the developing solar storm would reach the Red Planet.

Accurate space weather forecasting is critical to help protect current missions and future human explorers at the Red Planet because unlike Earth, Mars lacks a global magnetic field to shield against the damaging radiation solar storms can bring.

It started with the Sun

On Aug. 27, an active region on the Sun produced a series of solar flares, which are intense bursts of radiation. The flare activity was accompanied by a coronal mass ejection (CME), a massive explosion of gas and magnetic energy that leaves the Sun and propagates through space. This interplanetary CME impacted Mars a few days later.

This CME produced one of the brightest solar energetic particle (SEP) events that the MAVEN spacecraft has ever observed. The SEPs that were accelerated ahead of the CME were observed at Mars by MAVEN’s SEP detector on Aug. 27. In fact, many of MAVEN’s instruments were collectively able to measure the strength of the solar storm, including the Extreme Ultraviolet Monitor, the Magnetometer, the Solar Wind Ion Analyzer, and the Solar Wind Electron Analyzer.

“By utilizing space weather models of CME propagation, we determined when the structure would arrive and impact Mars,” said Christina Lee, a space physicist at the University of California, Berkeley, who is a member of the MAVEN mission team and is collaborating with the Moon to Mars Space Weather Analysis Office scientists. “This allowed the MAVEN team to anticipate some exciting disturbances in Mars’ atmosphere from the impacts of the interplanetary CME and the associated SEPs.”

Part of the reason that this incredible duo was observed simultaneously came down to timing. Mars is at the end of dust storm season, which occurs every Mars year during its closest approach of the Sun. These dust storms warm the atmosphere enough to allow water vapor to reach high altitudes, where it is broken up by solar ultraviolet radiation, releasing hydrogen atoms in the process. When the incoming solar wind hits all this extra hydrogen, the dayside of the planet lights up with ultraviolet emissions. These “proton aurora” just happened to coincide with the arrival of even more dynamic energic particles that penetrated deeper into the atmosphere, creating diffuse aurora visible across the entire nightside.

Sumedha Gupta, a postdoctoral researcher with the IUVS team at the Laboratory for Atmospheric and Space Physics at the University of Colorado Boulder, first noticed the coincidence during her routine check of incoming data a few days after the event. “I was so surprised to see proton aurora at the same time as diffuse aurora, because it had never happened before,” she said. “They’re both increasing with solar activity, so we hope it keeps happening!”

This light show is a sign of things to come for Mars and for the MAVEN team. The Sun is growing more and more active with events, such as flares and CMEs, as it approaches solar maximum in 2024-2025. Solar maximum is when the height of solar activity peaks in the Sun’s 11-year solar cycle, meaning CMEs and SEPs are expected to increase in frequency and continue to impact Mars’ atmosphere.

“It’s exciting to still be observing ‘firsts’ like these simultaneous aurora so many years into the mission. We have so much to learn about the atmosphere and how solar storms affect the Red Planet,” said Shannon Curry, MAVEN’s principal investigator at the University of California, Berkeley. “Our team cannot wait for the next few years of observing the most extreme conditions during the MAVEN mission’s lifetime.”

MAVEN’s principal investigator is based at the University of California, Berkeley, while NASA’s Goddard Space Flight Center in Greenbelt, Maryland, manages the MAVEN mission. Lockheed Martin Space built the spacecraft and is responsible for mission operations. NASA’s Jet Propulsion Laboratory in Southern California provides navigation and Deep Space Network support. The Laboratory for Atmospheric and Space Physics at the University of Colorado Boulder is responsible for managing science operations and public outreach and communication. 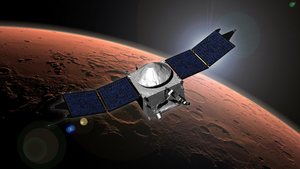