TAMPA FL, December 5, 2022 – Most of California’s population and its largest airports are located along the Pacific coastline, which is increasingly impacted by storm surges, sea level rise, and erosion due to climate change. In the next 30 years, sea level along the coast is expected to rise as much as 8 inches. All of this means more frequent and far-reaching flooding that will impact critical infrastructure like roads, power plants, and airports.

Lindbergh and her colleagues at UC Berkeley conducted a statewide assessment of California’s airport infrastructure exposure to projected coastal flooding (from storm surge and sea-level rise) up to the year 2100. Their research combines a novel coastal flooding exposure assessment of the airports with a policy review of more than 100 state legislature and planning documents to address the importance of collaborative climate adaptation.

The flooding exposure assessment is the first of its kind, using geospatial tools to look beyond each airport’s perimeter to include its entire interconnected infrastructure -- including road access, ground-based navigation, and communications systems. “It’s important to recognize that critical assets for airport operations may lie outside airport boundaries,” explains Lindbergh.

The analysis indicates that 39 out of 43 public coastal California airports have assets exposed to coastal flooding by 2100. (This number is much higher than traditional risk assessments that have only considered assets within an airport’s perimeters.) “Although we do not know how these newly identified exposures translate into impact,” says Lindbergh, “we were surprised to see that most of the airport assets could see a flooding event sooner than 2100 -- in the next 20 years.”

Sixteen of the 39 airports have assets exposed within their boundaries (i.e. runways and taxiways), while the remaining 23 have assets outside of their jurisdiction that are at risk from flooding (such as road access to the airport and navigation systems). The list includes Los Angeles International Airport (LAX), ranked among the top five busiest airports in the world.

The researchers also examined how airport assets exposed to flooding transfer risks to nine of the state’s key multimodal, interregional transportation corridors (which include connected highways and railways). The ripple effects on the transportation of both goods and people could include delays, congestion, and cancellations. Their report identifies critical airports within these corridors to be prioritized for adaptation, particularly those within the San Francisco Bay - Central Valley - Los Angeles corridor (such as San Francisco International Airport and Oakland International Airport) and also Murray Field Airport in Eureka within the San Francisco Bay – North Coast transportation corridor.

The team’s state policy review revealed that market and regulatory incentives for airport infrastructure (maintenance, upgrade, and replacement) are mostly bound to an airport’s perimeters. This limits the ability for diverse infrastructure stakeholders to understand and act on their collective exposure to hazards such as coastal flooding. “Most policies are still being designed to mitigate risk and promote adaptation at the single asset level -- for example, one airport at a time,” says Lindbergh.

She and her colleagues argue that measuring the exposure of interconnected infrastructure can help direct state-level policies that promote collaborative climate adaptation plans. “Our study pushes people to think beyond their boundaries and jurisdictions,” says Lindbergh.

Her presentation, “Cross-sectoral and multiscalar exposure assessment to advance climate adaptation policy: the case of future coastal flooding of California’s airports” on Monday, December 5th at 3:30 is part of a session on “Risk from Extreme Storm Events.” Here is a preprint of the study 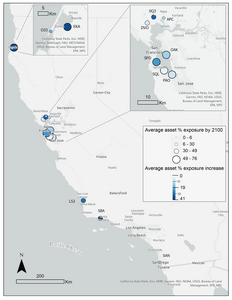