Gamma-ray bursts (GRBs) have been detected by satellites orbiting Earth as luminous flashes of the most energetic gamma-ray radiation lasting milliseconds to hundreds of seconds. These catastrophic blasts occur in distant galaxies, billions of light years from Earth.

A sub-type of GRB known as a short-duration GRB starts life when two neutron stars collide. These ultra-dense stars have the mass of our Sun compressed down to half the size of a city like London, and in the final moments of their life, just before triggering a GRB, they generate ripples in space-time – known to astronomers as gravitational waves.

Until now, space scientists have largely agreed that the ‘engine’ powering such energetic and short-lived bursts must always come from a newly formed black hole (a region of space-time where gravity is so strong that nothing, not even light, can escape from it). However, new research by an international team of astrophysicists, led by Dr Nuria Jordana-Mitjans at the University of Bath in the UK, is challenging this scientific orthodoxy.

According to the study’s findings, some short-duration GRBs are triggered by the birth of a supramassive star (otherwise known as a neutron star remnant) not a black hole.

Dr Jordana-Mitjans said: “Such findings are important as they confirm that newborn neutron stars can power some short-duration GRBs and the bright emissions across the electromagnetic spectrum that have been detected accompanying them. This discovery may offer a new way to locate neutron star mergers, and thus gravitational waves emitters, when we’re searching the skies for signals.”

Much is known about short-duration GRBs. They start life when two neutron stars, which have been spiralling ever closer, constantly accelerating, finally crash. And from the crash site, a jetted explosion releases the gamma-ray radiation that makes a GRB, followed by a longer-lived afterglow. A day later, the radioactive material that was expelled in all directions during the explosion produces what researchers call a kilonova.

However, precisely what remains after two neutron stars collide – the ‘product’ of the crash – and consequently the power source that gives a GRB its extraordinary energy, has long been a matter of debate. Scientists may now be closer to resolving this debate, thanks to the findings of the Bath-led study.

Space scientists are split between two theories. The first theory has it that neutron stars merge to briefly form an extremely massive neutron star, only for this star to then collapse into a black hole in a fraction of a second. The second argues that the two neutron stars would result in a less heavy neutron star with a higher life expectancy.

So the question that has been needling astrophysicists for decades is this: are short-duration GRBs powered by a black hole or by the birth of a long-lived neutron star?

To date, most astrophysicists have supported the black hole theory, agreeing that to produce a GRB, it is necessary for the massive neutron star to collapse almost instantly.

Astrophysicists learn about neutron star collisions by measuring the electromagnetic signals of the resultant GRBs. The signal originating from a black hole would be expected to differ from that coming from a neutron star remnant.

The electromagnetic signal from the GRB explored for this study (named GRB 180618A) made it clear to Dr Jordana-Mitjans and her collaborators that a neutron star remnant rather than a black hole must have given rise to this burst.

Elaborating, Dr Jordana-Mitjans said: “For the first time, our observations highlight multiple signals from a surviving neutron star that lived for at least one day after the death of the original neutron star binary.”

Professor Carole Mundell, study co-author and professor of Extragalactic Astronomy at Bath, where she holds the Hiroko Sherwin Chair in Extragalactic Astronomy, said: “We were excited to catch the very early optical light from this short gamma-ray burst – something that is still largely impossible to do without using a robotic telescope. But when we analysed our exquisite data, we were surprised to find we couldn’t explain it with the standard fast-collapse black hole model of GRBs.

“Our discovery opens new hope for upcoming sky surveys with telescopes such as the Rubin Observatory LSST with which we may find signals from hundreds of thousands of such long-lived neutron stars, before they collapse to become black holes.”

What initially puzzled the researchers was that the optical light from the afterglow that followed GRB 180618A disappeared after just 35 minutes. Further analysis showed that the material responsible for such a brief emission was expanding close to the speed of light due to some source of continuous energy that was pushing it from behind.

What was more surprising was that this emission had the imprint of a newborn, rapidly spinning and highly magnetised neutron star, called a millisecond magnetar. The team found that the magnetar after GRB 180618A was reheating the leftover material of the crash as it was slowing down.

In GRB 180618A, the magnetar-powered optical emission was one-thousand times brighter than what was expected from a classical kilonova.

A Short Gamma-Ray Burst from a Protomagnetar Remnant 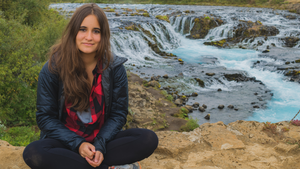