Researchers of the University of Malaga (UMA) and the University of Jaen (UJA) have discovered Egypt’s oldest tomb oriented to the winter solstice. Located in the necropolis of Qubbet el-Hawa (Aswan), it is precisely oriented to the sunrise of the winter solstice, in such a way that the sun's rays bathed with its light the place that was intended to house the statue of a governor of the city of Elephantine, who lived at the end of the XII Dynasty, around 1830 b. C.

This way, the tomb perfectly registered the whole solar cycle, related to the idea of rebirth. While the winter solstice meant the beginning of the sunlight victory over darkness, the summer solstice generally coincided with the beginning of the annual flooding of the Nile, hence both events had an important symbolism linked to the resurrection of the deceased governor.

Perfection in the orientation

In this paper, recently published in the prestigious scientific journal Mediterranean Archaeology and Archaeometry, the researchers explain that, in order to achieve perfection in the orientation, the Egyptian architect simply used a two-cubit pole, around one meter long, a square and some robes, with which he was able to perfectly calculate the orientation of the funerary chapel and the location of the statue of the governor.

Moreover, they explain that the Egyptian architect not only achieved the perfect orientation, but also designed its volume with great precision, as determined in a previous paper published by the UJA in 2020 and signed by, among others, Professor Antonio Mozas –also author of this article–, which revealed that the volume of the tomb was perfectly calculated to avoid being coincident with any previous tomb.

The tomb of this governor, catalogued with No. 33, and possibly built by Governor Heqaib-ankh, was excavated by the UJA between 2008 and 2018. From that time on, it has been architecturally studied by different specialists, among them, the Professor of Architecture at the UMA Lola Joyanes, who has been participating in this project since 2015, working on her own line of research since 2019.

The work this researcher of the UMA has performed in the necropolis involves everything related to architecture and landscape, particularly, their study through drawing and photogrammetry.

A specific software to reproduce the position of the sun

The Andalusian scientists reached these conclusions thanks to the identification of the period where the tomb was built, which allowed them to use a specific software (Dialux Evo) that reproduces the position of the sun with respect to the horizon in ancient times.

“This study demonstrates that Egyptians were capable of calculating the position of the sun and the orientation of its rays to design their monuments. Although the tomb No. 33 of Qubbet el-Hawa is the oldest example ever found, certainly it is not the only one”, say the scientists.

This research has been financed by the Government of Andalusia within its projects “A way to immortality: beyond the preparation for death during Middle Kingdom at Qubbet el-Hawa (Aswan, Egypt)” of the University of Jaen and “Archaeology, Architecture and Landscape: typological evolution and state of conservation of tombs in the necropolis of Qubbet el-Hawa (Aswan, Egypt). Intervention criteria”. 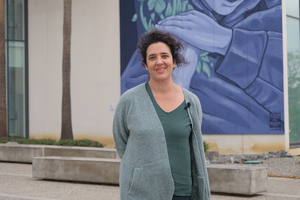 Professor of Architecture at the UMA Lola Joyanes, who has been participating in this project since 2015, working on her own line of research since 2019 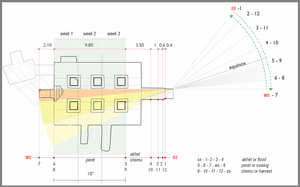 Plan of the tomb