Making the next pivotal research discovery depends on America’s ability to do great science. But the process of enabling these discoveries often originates years before the breakthrough data are actually collected.

From the time any experiment at the U.S. Department of Energy’s (DOE) Argonne National Laboratory is conceived, advances toward its realization are made by unheralded teams. They work tirelessly to ensure that Argonne’s facilities, equipment and workspaces — from lab bench setups at Argonne’s main campus to a huge experiment in a mine in South Dakota — can carry out the highly precise and mechanically and intellectually demanding research tasks that laboratory scientists have decided to pursue.

Behind the scenes of the vast array of different projects at Argonne, an extensive array of technicians, engineers, riggers, machinists, facility operators and others work tirelessly to enable the laboratory’s mission and propel Argonne into the future.

One group of these, found in the laboratory’s Experimental Operations and Facilities (EOF) division, takes on the challenge of assisting with the design and engineering of the laboratory’s experimental setups. ​“We’re there at the very beginning of the process, taking in information from scientists and researchers about what their exact needs are and how we can best assist them,” said EOF Division Director Chuck Kozlowski. ​“Sometimes they might need heavy and expensive equipment that can be moved in precise and yet flexible ways; other times they might need help with experimental design — we’re there to assist every step of the way.”

As part of a support group called upon to bring the concept of an experimental setup to reality in the laboratory, technicians in the EOF division figure out the practical requirements needed to carry out research successfully. ​“A lot of times, we are the human interface with the equipment,” Kozlowski said. ​“Argonne’s focus is on world-class research, and our focus is on providing world-class support to help enable researchers bring their ideas to life.”

When laboratories are built, their spaces often offer a mostly blank canvas that engineers and experimental designers must configure deliberately to realize the best possible results. ​“It’s like when you buy a house,” Kozlowski said. ​“There are certain space limitations, but within those constraints you want to have the best possible use of the space.”

The work done by the engineers and the designers in the EOF division touches on some of the laboratory’s biggest experiments. For Argonne’s high energy physics research, where scientists are trying to use gigantic machines needed to track some of the tiniest particles in the universe, like neutrinos, ​“there’s material testing and engineering involved that’s hidden in the background,” said Argonne engineer Vic Guarino.

Guarino’s work supports physicists in Argonne’s High Energy Physics division and is in turn, part of a consortium of national laboratories and universities, as well as contributors from other countries. The group has begun to build the Deep Underground Neutrino Experiment (DUNE), which connects DOE’s Fermi National Accelerator Laboratory in Illinois with the Sanford Underground Research Facility in South Dakota.

“When you look at a scientific paper, you can find out from the materials and methods how an experiment was carried out, but frequently there’s no mention of how an experiment was practically designed from the ground up,” Guarino said. ​“Hidden within an interesting result, more often than not, is a lot of ​‘grunt work’ that makes the whole experiment possible.”

EOF’s engineers and designers typically get involved with the experimental process right at the outset, meeting with researchers when their ideas for experiments are mostly just that — ideas. ​“A scientist might have a vision of what they want to do, but when they meet with us, we can help them explore the different opportunities and parameters that will help to practically design and implement solutions that meet their needs,” Kozlowski said.

In another project, EOF engineers are working with scientists to enable research on the effects of connected and automated vehicles, or self-driving cars, on their surroundings. This helps researchers understand the effects of the new technology that can be included in modeling.

In this effort, EOF engineers assisted in the design, fabrication and commissioning of a perception camera system with a 360-degree view, outfitted the system with radar, and installed the modular perception system on multiple self-driving cars. Furthermore, they assisted in the design and wiring of an integrated mobile data acquisition unit that collects and saves a digital copy of on-road information that the car perceives.

The interaction between scientists and engineers creates an interplay of ideas in which each group can help the other to see new possibilities and push the frontiers of science. According to Guarino, many scientists have a strong mechanical background and offer new perspectives that complement those of the EOF engineers.

“We’re constantly inspiring each other,” Guarino said. ​“The intersection of different areas of expertise means that we are constantly creating new avenues of discovery.”

“Everything comes down to being able to ask the right questions of one another,” Kozlowski added. ​“We want to know what’s possible and what’s not possible, and work together to define the requirements in a realistic way.”

Successfully achieving everything — from the final design of a project to the fundamental requirements for each experiment, including the electrical service and the installation process — requires this kind of collaboration. ​“What we’ve seen is that we can get everyone involved at the very front end of the process, from the engineer to the scientist to the operator, which gives you three different and complementary perspectives right from the get-go to inform exactly what the experiment is going to look like,” Kozlowski said. ​“How we choose to create and conduct an experiment must align for everyone.”

For both Kozlowski and Guarino, creating and implementing simple and effective designs at low cost represents the ultimate goal. ​“Simple is always better, but there are often a number of logistical hurdles that get in the way of making things simple,” Kozlowski said. ​“By working together and sharing our insights, we can try to find elegant solutions for great science.” 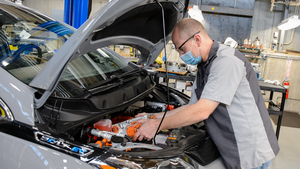