The millions of people throughout the world off the electrical grids have a starkly different idea of what a technological marvel looks like. Too many times, it’s not massive hydroelectric dams.

Rather, people desperate for electricity find a technological marvel is that which reliably and sustainably brings the power and empowers.

A group of international scientists share their success in transforming what has been a top-down process that usually puts technology before people into one that provides electricity to the people in the remote Brazilian Amazon, thereby changing how the energy transition is achieved. “Advancing Convergence Research: Renewable Energy Solutions for Off-Grid Communities” was published in this week’s Proceedings of the National Academy of Sciences of the United States (PNAS).

Social scientists and communications experts joined engineers and engaged rural communities that are off grid deep in the Amazon rainforest to find better ways to deliver the electricity they need. The challenge was how to do so without harming the environment and ensuring that the people can maintain the system long after it has been installed. This strategy, using a mix of in-stream generators and solar panels, also seeks ways to match these technologies with community needs and preferences to change the lives of millions of underserved people.

“This article develops a framework to facilitate how social sciences, communication scholars and engineering can jointly address pressing problems such as finding energy solutions for the 680 million people around the world who are off electrical grids,” said lead author Emilio Moran, John A. Hannah Distinguished Professor of Global Change Science at Michigan State University. “We were able to work with underserved populations that have been left behind by legacy approaches.”

“Work with” is the distinctive way this team has worked with those without access to electricity.  Isolated rural communities in the Brazilian Amazon have for decades struggled to charge phones, have light at the day’s end to eat a meal, or have enough electricity to refrigerate food. Technological triumphs that many take for granted have never reached them, the paper notes. Enormous hydroelectric dam projects in the Amazon have damaged forests and rivers and dislocated people, yet the power generated by these large projects has bypassed isolated communities, damaged the environment and perpetuated energy injustices.

When large-scale solar power has been tried in the Amazon in the recent past, they came without adequate training and the resources to maintain the technology, and within five years 80% of the equipment no longer work..

This project builds on those experiences, making training community members a central feature, so the energy system is one they help created, and that they will govern. Social scientists and communication experts together with engineers developed what they call “Inclusive engineering” distinct from other approaches by how it engages with the people in three communities of the Tapajós-Arapiuns Extractive Reserve in western Pará state.

The team sought out an understanding of community values, what they envision the future to be, and ensuring solutions do not disrupt the relationship with surrounding rivers and forests that are at the basis of their livelihoods.

The team spent months understanding how much electricity the people needed and what future uses might be to improve their economic and social lives. They analyzed the news media the people consumed to understand what information they receive and how it shapes their beliefs about energy technologies.

“By bringing together journalism researchers and practitioners, we were able to understand the country’s narratives about energy and how those narratives interact with people’s lived experiences to shape attitudes about possible solutions,” said Rachel Mourão, co-author and associate professor in the MSU School of Journalism.

The group also worked to understand the dynamics of the communities’ decision-making. They have only had four hours of power from diesel generators, which are expensive to run and that requires many hours to get the necessary diesel, a crucial factor.

“If we don't support communities to improve their lives in the countryside, they will migrate to the city and thus make life in big cities even more complicated,” said Rudi van Els, associate professor of engineering, University of Brasília, a project collaborator.

The interdisciplinary team emphasizes that this framework of cooperation can be applied to isolated off grid communities throughout the world to help break the cycle of poverty, inequity, and marginalization that limits their human potential, and to address other sustainability challenges.

The research was funded by the National Science Foundation, with additional support from the Mott Foundation. 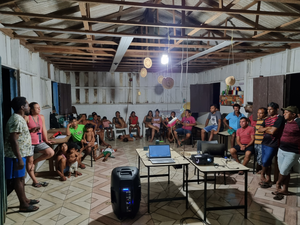