It sounds a bit like a magic trick: Some materials can be shot through with fast, electrically charged ions without exhibiting holes afterwards. What would be impossible at the macroscopic level is allowed at the level of individual particles. However, not all materials behave the same in such situations - in recent years, different research groups have conducted experiments with very different results.

At the TU Wien (Vienna, Austria), it has now been possible to find a detailed explanation of why some materials are perforated and others are not. This is interesting, for example, for the processing of thin membranes, which are supposed to have tailor-made nano-pores in order to trap, hold or let through very specific atoms or molecules there.

Ultra-thin materials - graphene and its peers

"Today, there is a whole range of ultrathin materials that consist of only one or a few atomic layers," says Prof. Christoph Lemell of the Institute of Theoretical Physics at TU Wien. "Probably the best known of these is graphene, a material made of a single layer of carbon atoms. But research is also being done on other ultrathin materials around the world today, such as molybdenum disulfide."

In Prof. Friedrich Aumayr's research group at the Institute of Applied Physics at TU Wien, such materials are bombarded with very special projectiles - highly charged ions. They take atoms, typically noble gases such as xenon, and strip them of a large number of electrons. This creates ions with 30 to 40 times the electrical charge. These ions are accelerated and then hit the thin layer of material with high energy.

The velocity of the electrons

These astonishing differences can be explained by the fact that it is not the momentum of the projectile that is mainly responsible for the holes, but its electric charge. When an ion with multiple positive charge hits the material layer, it attracts a larger amount of electrons and takes them with it. This leaves a positively charged region in the material layer.

What effect this has depends on how fast electrons can move in this material. "Graphene has an extremely high electron mobility. So this local positive charge can be balanced there in a short time. Electrons simply flow in from elsewhere," Christoph Lemell explains.

In other materials such as molybdenum disulfide, however, things are different: There, the electrons are slower, they cannot be supplied in time from outside to the impact site. And so a mini-explosion occurs at the impact site: The positively charged atoms, from which the projectile has taken their electrons, repel each other, they fly away - and this creates a nano-sized pore.

"We have now been able to develop a model that allows us to estimate very well in which situations holes are formed and in which they are not - and this depends on the electron mobility in the material and the charge state of the projectile," says Alexander Sagar Grossek, first author of the publication in the journal Nano Letters.

The model also explains the surprising fact that the atoms knocked out of the material move relatively slowly: The high speed of the projectile does not matter to them; they are removed from the material by electrical repulsion only after the projectile has already passed through the material layer. And in this process, not all the energy of the electric repulsion is transferred to the sputtered atoms - a large part of the energy is absorbed in the remaining material in the form of vibrations or heat.

Both the experiments and the simulations were performed at TU Wien. The resulting deeper understanding of atomic surface processes can be used, for example, to specifically equip membranes with tailored "nanopores". For example, one could build a "molecular sieve" or hold certain atoms in a controlled manner. There are even thoughts of using such materials to filter CO2 from the air. "Through our findings, we now have precise control over the manipulation of materials at the nanoscale. This provides a whole new tool for manipulating ultrathin films in a precisely calculable way for the first time," says Alexander Sagar Grossek.

How to fire projectiles through materials without breaking anything 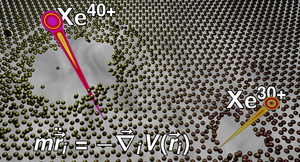