An interdisciplinary team of scientists from Cologne, Heidelberg and Munich have discovered a new function of a well-known enzyme: The signal peptidase complex in the endoplasmic reticulum cleaves faulty membrane proteins to initiate their degradation. In our cells, the endoplasmic reticulum is responsible for producing and controlling proteins that get secreted from the cell. The signal peptidase complex cuts these polypeptide chains to remove signal peptides that allow proteins to reach the endoplasmic reticulum in the first place, so that the mature proteins can fulfil their specific functions. A research team led by Matthias Feige, Professor for Cellular Protein Biochemistry at the Technical University of Munich (TUM), and Marius Lemberg, Professor for Biochemistry at the University of Cologne, has now discovered that the signal peptidase complex has a hitherto unknown function in another key process in cell biology: the quality control of membrane proteins. Their findings have now been published in Science under the title ‘The Human Signal Peptidase Complex Acts as a Quality Control Enzyme for Membrane Proteins’.

Each cell is surrounded by a lipid bilayer, which protects the interior of the cell, but also demands for regulated transport of molecules and signals across this insulating layer to enable a plethora of cellular functions. Membrane proteins are integrated into this lipid bilayer and perform these functions. They are essential for cell survival and serve as the most important drug targets. To function properly, membrane proteins need to adopt a well-defined three-dimensional structure at the atomic level. Failures in this process can result in faulty proteins, which in turn gives rise to numerous diseases, including cancer as well as metabolic and neurodegenerative disorders.

The team explored several disease-associated membrane proteins of our nervous system in order to better understand how our cells avoid that those faulty proteins damage them an and cause disease. During the course of their research, they observed that a protease – an enzyme that cleaves other proteins – initiates the degradation of the faulty mutant proteins. This degradation is essential to maintaining cellular function. However, they were unable to identify the protease involved. ‘All known candidates and commonly used inhibitors did not help us in our quest for the underlying molecular mechanism,’ said Feige.

Subsequently, the interdisciplinary team of researchers identified several additional proteins that get cleaved and how this unexpected function might be regulated by the signal peptidase subunit SPCS1. ‘Since this factor is not essential for the initially described role in protein maturation, we realized that we were dealing with a previously unrecognized function,’ Feige explained.

‘Interestingly, SPCS1 is one of the only three genes that are down-regulated in all brain regions of Alzheimer’s disease patients, suggesting that our findings may have important implications for our understanding of human biology and age-associated disorders,’ Lemberg added. In Alzheimer’s disease, faulty proteins accumulate, which is thought to impair neuronal function. Feige concluded: ‘Our findings will help us to better understand how cells control the molecular shape of their proteins and lays the foundation for many future studies to come.’

The research was funded by the German Federal Ministry of Education and Research (BMBF), the German Science foundation (DFG), and the Fritz Thyssen Foundation. 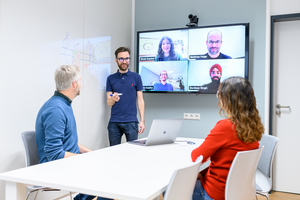