Because breathing is generally involuntary, we sometimes forget how complicated it is. But biologists are gaining new insight into the intricate process in plants, with big implications for how to feed the world in the future.

Researchers at the University of California San Diego, funded by the U.S. National Science Foundation, along with collaborators in Estonia and Finland, have found an elusive molecular pathway that plants use to direct their "breathing" of carbon dioxide. The researchers hope that harnessing this mechanism could lead to future engineering of plant water use efficiency and carbon intake, critical as atmospheric carbon dioxide concentration continues to increase. In fact, the researchers have filed a patent and are examining ways to translate their findings into tools for crop breeders and farmers.

The research was published today in Science Advances.

Plants take in carbon dioxide and water and then use light to turn these into the nutrients they need to grow. This process also emits oxygen, which humans and other animals then breathe. That's the basic summary of photosynthesis. But how exactly does it work?

The process becomes a bit clearer on the microscopic level. On the underside of leaves and elsewhere, depending on the plant, are tiny openings called stomata — thousands of them per leaf with variations by plant species. Like little castle gates, pairs of cells on the sides of the stomatal pore — known as guard cells — open their central pore to take in the carbon dioxide. However, when stomata are open, the inside of the plant is exposed to the elements and water from the plant is lost into the surrounding air, which can dry out the plant. Plants, therefore, must balance the intake of carbon dioxide with water vapor loss by controlling how long the stomata remain open.

"The response to changes is critical for plant growth and regulates how efficient the plant can be in using water, which is important as we see increased drought and rising temperatures," said Julian Schroeder, Torrey Mesa Research Institute chair in plant science at UC San Diego, who led the new research.

As the climate changes, both atmospheric carbon dioxide concentration and temperature increase, affecting the balance between carbon dioxide entry and water vapor loss through the stomata. If plants, especially crops like wheat, rice and corn, can't strike a new balance, they risk drying out, farmers risk losing valuable output, and more people across the world risk going hungry. Even with advances in agriculture, an NSF-funded study in published in 2021 found that global agricultural productivity over the past 60 years is still 21% lower than it could have been without climate change.

Scientists have long understood stomata and the balance between carbon dioxide intake and water loss. What they haven't known, until now, is how plants sense carbon dioxide to signal stomata to open and close in response to changing carbon dioxide levels. Knowing this will now enable researchers to edit those signals — so plants can strike the right balance between taking in carbon dioxide versus losing water — and allow scientists and plant breeders to produce crops robust enough for the environment of the future.

The researchers identified a series of proteins that work like a chain of soldiers sensing the carbon dioxide level and calling out "CLOSE THE GATES!" to get the guard cells to relax and shut the stomata.

"Finding that the CO2 sensor in plants is made up of two proteins was enlightening and may be a reason the mechanism hadn’t been identified until now," Schroeder said. "NSF support over the last two decades was critical to locating this elusive pathway."

"This work is a wonderful example of curiosity-driven research that brings together several disciplines — from genetics to modeling to systems biology — and results in new knowledge with the ability to aid society, in this case by making more robust crops," said Matthew Buechner, a program director in NSF's Directorate for Biological Sciences.

In a low-carbon dioxide environment where the plant needs to keep the stomata open longer to get the amount it needs for photosynthesis, a protein known as HT1 activates an enzyme that forces the guard cells to swell up, keeping the stoma open.

When the plant senses increased levels of carbon dioxide, a second protein blocks the first one from keeping the stomata open, and the stomata shut. If the stomata close before the plant can get enough resources for photosynthesis, agricultural yield can be lower or non-existent.

"Determining how plants control their stomata under changing CO2 levels creates a different kind of opening — one to new avenues of research and possibilities for addressing societal challenges," said Richard Cyr, an NSF program director who studied plant cell biology prior to joining the agency. 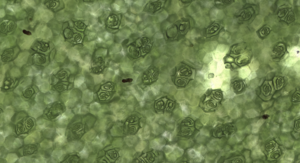 A magnified view of many plant stomata on a begonia leaf. 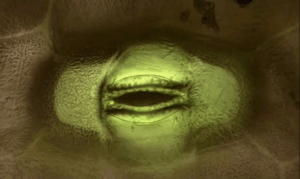 Animated GIF of a plant stoma opening and closing. 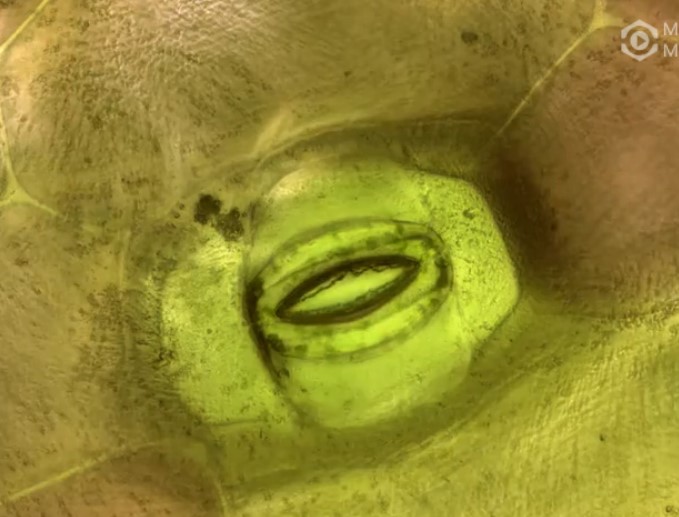 A video of a tiny plant stoma opening and closing.