Restoring and rewilding islands that have been decimated by damaging invasive species provides benefits to not only the terrestrial ecosystem but to coastal and marine environments as well. Linking land and sea through coordinated conservation efforts may offer unrealized and amplified benefits for biodiversity, human wellbeing, climate resilience and ocean health, and provides a microcosm for the untapped potential of ecosystem restoration on a larger scale. This new era of conservation focuses on the interconnectedness of all ecosystems, rather than pursuing individual pieces through siloed efforts.

A new perspective published today, December 5, in the Proceedings of the National Academy of Sciences (PNAS) titled “Harnessing island–ocean connections to maximize marine benefits of island conservation” recognizes the critical link between island and marine ecosystems and identifies island and near-shore marine environmental characteristics that promote strong linkages in these ecosystems around the world. The result is a model for effective land-sea conservation and management decisions by governments, foundations, Indigenous peoples, local communities, NGOs and conservationists to harness the power of island-ocean connections that bolster ocean health.

“By applying this knowledge to islands worldwide, we can understand the marine benefits of island restoration projects and maximize returns for our conservation management investments for people, wildlife, and the planet,” said Stuart A. Sandin, PhD., lead author of the perspective and a marine ecologist at Scripps Institution of Oceanography at the University of California San Diego.

Islands support some of the most valuable ecosystems on Earth, with a disproportionate amount of rare plants, animals, communities, and cultures found nowhere else. Healthy land-sea ecosystems depend on a flow of nutrients from oceans to islands and from islands to oceans, a process that “connector species,” such as seabirds, seals, and land crabs, facilitate. Research shows that islands with high seabird populations, for example, which feed in the open ocean and bring large quantities of nutrients to island ecosystems through their guano deposits, are associated with larger fish populations, faster-growing coral reefs, and increased rates of coral recovery from climate change impacts.

Many seabird species, however, have been driven to local or global extinction or near-extinction due to invasive non-native mammals, such as rats that eat bird eggs and young hatchlings on islands where they nest. The loss of these connector species populations often results in ecosystem collapse–both on land and in the sea. Removing invasive species from islands is one of our best tools for restoring native plants, animals, and ecosystems.

“Islands and oceans are connected–something many people living along coasts have long understood, depended on and managed holistically as a result,” said Penny Becker, PhD., a coauthor on the perspective and vice president of conservation for the nonprofit Island Conservation. “Linking efforts on land, including removing invasive species from islands, with marine restoration and protection offers a significant untapped opportunity to protect and restore both islands and coastal regions.”

The insights put forward by the authorship collaboration of researchers, non-profit conservationists, government agency representatives, and others can help shape where the most impactful marine co-benefits of island restoration could occur. They highlight six essential environmental characteristics that can guide prioritization of island-ocean restorations: precipitation, elevation, vegetation cover, soil hydrology, oceanographic productivity, and wave energy.

The paper identifies islands with higher rainfall, lower wave energy, and other conditions consistent with high land–sea connectivity, such as Floreana Island in Ecuador’s Galapagos Archipelago as having high potential to produce substantial marine co-benefits after invasive species removal and island rewilding.

“This research is incredibly useful for prioritizing where to focus conservation work and precious resources to have the greatest impact,” said Wes Sechrest, Ph.D., co-author and chief scientist and CEO for the nonprofit Re:wild. “By restoring and rewilding Floreana Island, we now know that we will also be restoring and protecting wildlife in the Marine Protected Area surrounding the island and beyond, and providing climate resilience. This is critical to building a sustainable Floreana for local islanders and a healthier planet for all life on Earth.”

Floreana residents have witnessed the negative effects of invasive species firsthand for decades and are shaping their island’s future by playing a central role in its restoration.

Sonsorol Island, Palau is another site with high land-sea connectivity potential. The reduction in seabirds due to invasive species has significantly slowed nutrient deposition, which in turn is limiting the productivity of surrounding reefs. Sonsorol Island’s remoteness means that the community depends heavily on the local resources available to them. Prior to the impacts of invasive species, Sonsorol Island residents lived harmoniously with their environment and thrived on the natural resources provided by the land and sea.

“Sonsorol and Floreana Island are just two of the many islands that hold great potential for healing marine environments,” said Kate Brown, executive director of the Global Island Partnership and co-author. “Prioritizing island restoration across the globe can have a significant benefit for our world’s biodiversity, both on land and in the sea. Together, we can build resilient island communities supported by healthy island and marine ecosystems teeming with biodiversity.”

The Sonsorol and Floreana island restoration projects are part of an ambitious new environmental campaign called the Island-Ocean Connection Challenge, which aims to restore and rewild at least 40 globally significant island ecosystems to benefit islands, oceans, and communities by 2030. Founding partners, Island Conservation, Re:wild and Scripps Institution of Oceanography launched the Island-Ocean Connection Challenge in April 2022 at the Our Ocean conference in Palau with the Republics of Panama, and Palau with supporters including the David & Lucile Packard Foundation, Oceankind, Cookson Adventures, the Leo Model Foundation, North Equity Foundation, and the Sheth Sangreal Foundation. Since then, the campaign has welcomed new partners and supporters, including the government of Chile, Danny Faure Foundation, the government of the Dominican Republic, the government of Ecuador, the Global Island Partnership, Marisla Foundation and the Oceans Finance Company.

“Invasive species are destroying our island. They devour crops and are pushing our seabird populations to the brink of extinction. We catch less fish every year. By removing invasive species, we have the opportunity to restore both the land and the sea, and provide more ecotourism opportunities for the first time on an inhabited island in the archipelago. Our livelihoods, our health and the next generation’s future depend on it.” — Max Freire, Floreana Island native and fisherman

“Rats have infested our plants including tuba. They threaten our food security and spread diseases. The community has been wanting, crying for this kind of project to happen. We will definitely benefit from the restoration of Sonsorol.” — Nicholas Aquino, Governor of Sonsorol State, Republic of Palau

“What ecosystem riches were lost when the Great Auk went extinct? Or the Large St. Helena Petrel? This new research supports the basic tenet of conservation that ABC has been working with for many decades: Restoring bird populations has profound benefits to the habitats they live in — terrestrial, coastal, and marine. This means that protecting marine birds throughout their life cycle and across the entirety of their migratory pathways should always be a top priority in the restoration of marine economies, islands, and ecosystems.” — Sea McKeon, PhD., Marine Program Director, American Bird Conservancy

“Advancing our understanding of marine and terrestrial linkages is invaluable for organizations like The Nature Conservancy to plan and execute effective conservation on islands and builds upon a foundation of indigenous knowledge about the land and sea. This underscores the importance of work in places like Palmyra Atoll, where The Nature Conservancy and partners are restoring seabird habitat, and recovering extirpated seabird species, to maximize land-sea connectivity and strengthen resilience to climate change.” — Nick Holmes, PhD., co-author and Associate Director for Oceans, The Nature Conservancy of California

“We don’t often realize that what we do on land affects the health of the ocean. Even less obvious is that the health of the ocean affects the land since species like seabirds feed at sea and deposit nutrients on land, thus increasing productivity. This strong interconnect between land and sea was well known to indigenous islanders and the renaissance of this traditional knowledge combined with contemporary science holds great promise in helping to restore these unique ecosystems.” — Alan Friedlander, PhD., Chief Scientist, National Geographic Pristine Seas

“Traditional cultures have long been holistic, seeing connections between different components in nature. For more than a millennium, people of Japan, for example, have recognized "uotsukirin," or fish-breeding forests, emphasizing the importance of island ecosystems to marine life. Modern science has lost sight of holistic perspectives, which researchers are now re-learning from traditional, Indigenous cultures around the world. Our research highlights this increased realization.” — Tadashi Fukami, PhD., Stanford University

“Indigenous cultures on islands managed watersheds from ‘ridge to reef’, recognizing that land use has consequences for sustainability of coastal ecosystems downstream. Our research supports and extends this wisdom by providing hypotheses for environmental characteristics where island restoration actions are most likely to benefit nearshore ecosystem functions.”— Daniel Gruner, PhD., University of Maryland.

“An island may appear as an isolated oasis at the surface, but it is just the tip of a broader ecosystem that is inextricably connected to the surrounding sea. Rich, deep, and complex connections exist between land and sea that, in turn, support immense diversity. Our research emphasizes the importance of recognizing, understanding, and honoring these connections through collaborative and inclusive work that benefits both wildlife and people. Terrestrial restoration of islands–in particular, by removing invasive predators–can have far-reaching ripple effects into surrounding coral reefs and beyond.”— Wieteke Holthuijzen, PhD. student, University of Tennessee - Knoxville

“Species that link land and sea like seabirds inextricably connect these two ecosystems. But scientists, conservation organizations, and other stakeholders often stay siloed and focused on just one or the other. Our research shows the importance and power of cross-ecosystem and cross-sector collaborations for maximizing the potential for significant conservation outcomes.”— Holly Jones, PhD., Northern Illinois University

"Nutrients from native marine life, from both land and within the sea, are likely necessary for enhancing coral growth and reducing coral diseases. Since corals provide the foundational structure of island reefs, accelerating growth and increasing the health of different coral species can promote the resilience of reef biodiversity overall.” — Rebecca Vega-Thurber, PhD., Oregon State University 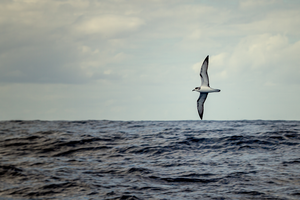 Over-under image of an island ecosystem 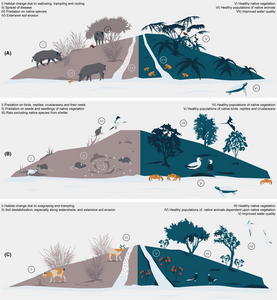