A study into the impact of global warming on the biodiversity of the Antarctic has identified how predicted expansion of ice-free areas will impact native animals and plants, paving the way for the invasion of non-native species in Antarctica.

An international team of all-women researchers, who published their study in Global Change Biology, included researchers from Australia, the UK, and the United States, including QUT’s Dr Justine Shaw and Dr Jasmine Lee, who is also a research fellow at the British Antarctic Survey. Dr Shaw and Dr Lee are researchers with the Australian Research Council special research initiative Securing Antarctica’s Environmental Future (SAEF).

Dr Lee, the first author of the study, said although permanently ice-free land currently covered less than one percent of Antarctica, it is predicted to increase by nearly 25 percent by 2100. Ice free area is crucial habitat for most of Antarctica’s terrestrial biodiversity, including its iconic seabirds, who need ice-free land for breeding.

“We know that there will be thousands of square kilometres of new-ice free area and the warmer temperatures and extra available water will create new habitats ripe for colonisation, which will benefit some species and not others,” Dr Lee said.

“Unfortunately, the milder climates will also lower the barrier of invasion for foreign plant and animal species”

Dr Shaw, who has conducted research on Antarctica and sub-Antarctic Macquarie Island for 20 years, said there were still many questions to be answered about the impacts, and while some species might flourish with the new habitat areas, it was unclear if they might decline at a certain threshold.

“There are many species of plants and animals, including the gentoo penguins, that will have new habitat available as the ice melts,” Dr Shaw said.

“That could be seen, at least for those colonies, as a  benefit of having more nesting habitat, but other species of Antarctic penguins won’t cope with the changing conditions.

“Also the new ice-free areas, patches of land, will connect together, they will no longer be isolated from each other.”

This could be negative for some species as they will have to cope with new competition from other native species and possibly invading non-native species that move in.

The study identifies the ten key research questions that need to be addressed by Antarctic researchers to better understand the impacts of the new ice-free areas.

“We have a mix of ecologists, applied mathematicians, data and conservation scientists, engineers and data visualisation experts involved in SAEF projects.”

“They are studying Antarctica’s past and present and working on the science, technology and policy we need to conserve Antarctica’s unique and critical environment through the 21st century and beyond.”

“Our research into Antarctica – and many other environments around the world – is part of QUT’s broader commitment to sustainability research, education and practice.

Ms Selfe will be researching lake sediments and peat cores to understand how climate has changed in the past 12,000 years, how lakes on the island may change. Ms Smith, will be researching environmental change over time and aims to determine how seabird populations and vegetation communities have changed over time.

Islands in the ice: Potential impacts of habitat transformation on Antarctic biodiversity 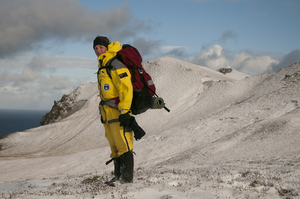