Free-living great tits differ considerably in the level of stress hormones in their blood. A research project at the Max Planck Institute for Biological Intelligence (in foundation) studied the birds over several years. The scientists observed large differences in how strongly glucocorticoid hormone levels fluctuated in individual great tits, as the birds experienced different environmental temperatures. Such differences among individuals can make it easier for bird populations to adapt to changing conditions – such as more frequent temperature extremes due to climate change.

Hormones control vital body functions in many animals, including birds. They help animals to regulate metabolism and food intake, thereby supporting them in maintaining their body temperature within a certain range. Glucocorticoids are stress hormones that coordinate many of the functions that help animals to cope with changes in their environment. On cold days, they are produced in larger amounts and help the body to use carbohydrate, fat, and protein reserves to generate heat. When temperatures are higher, glucocorticoid levels decrease and so does the conversion of energy into body heat.

In environments with widely fluctuating temperatures, stabilizing body temperature by hormones becomes increasingly important. Small warm-blooded animals such as birds must respond quickly to temperature fluctuations in order to maintain their body temperature. As a consequence of climate change, many habitats undergo major changes in environmental conditions, and extreme temperatures occur more frequently. Yet, how much does the climate affect the hormone balance of birds? Do individuals cope differently with climate change?

To answer these questions, data must be collected over several years. Research group leader Michaela Hau and two colleagues thus determined the glucocorticoid levels of a population of great tits in southern Bavaria over five years. They related their measurements to environmental temperatures and found, as expected, that hormone levels were higher at colder temperatures. However, there were also large differences in the responses of individual birds to temperature fluctuations.

"We observed for the first time in free-living vertebrates that some individuals show a more pronounced adjustment in glucocorticoid levels to environmental temperature than others," says Michaela Hau. “This variation among individuals may allow populations to cope with a wide range of environmental conditions.” Further studies are needed to determine whether the observed hormonal differences among individuals lead to differences in heat production or resistance to heat loss. It is also unknown whether this individual variation is associated with increased reproductive success or survival.

"If the strength of glucocorticoid changes has a heritable component and individuals with certain hormonal responses produce more offspring or survive longer, natural selection may alter the composition of populations in subsequent generations," Michaela Hau explains. "Our work therefore is an important basis for understanding whether and how animals can adapt to climate change." 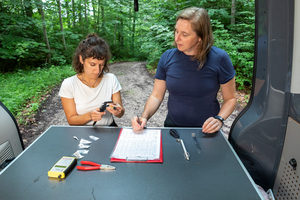