Scientists from the Royal Ontario Museum (ROM), Royal BC Museum, and North Carolina Museum of Natural Sciences have found new evidence for how armoured dinosaurs used their iconic tail clubs. The exceptional fossil of the ankylosaur Zuul crurivastator has spikes along its flanks that were broken and re-healed while the dinosaur was alive—injuries that the scientists think were caused from a strike by another Zuul’s massive tail club. This suggests ankylosaurs had complex behaviour, possibly battling for social and territorial dominance or even engaging in a “rutting” season for mates. The research is published in the journal Biology Letters.

The 76-million-year-old, plant-eating dinosaur, part of the Royal Ontario Museum’s vertebrate fossil collection, is named after the fictional monster ‘Zuul’ from the 1984 movie Ghostbusters. Initially the skull and tail had been freed from the surrounding rock, but the body was still encased in 35,000 pounds of sandstone. After years of work, the body was revealed to have preserved most of the skin and bony armour across the entire back and flanks, giving a remarkable view of what the dinosaur looked like in life. Zuul’s body was covered in bony plates of different shapes and sizes and the ones along its sides were particularly large and spiky. Interestingly, the scientists noticed that a number of spikes near the hips on both sides of the body are missing their tips and the bone and horny sheath has healed into a blunter shape. The pattern of these injuries is more consistent with being the result of some form of ritualized combat, or jousting with their tail clubs, and probably weren’t caused by an attacking predator like a tyrannosaur because of where they are located on the body.

Zuul’s tail is about three metres (10 feet) long with sharp spikes running along its sides. The back half of the tail was stiff and the tip was encased in huge bony blobs, creating a formidable sledgehammer-like weapon. Zuul crurivastator means ‘Zuul, the destroyer of shins’, a nod to the idea that tail clubs were used to smash the legs of bipedal tyrannosaurs. The new research doesn’t refute the idea that tail clubs could be used in self-defense against predators, but shows that tail clubs would also have functioned for within-species combat—a factor that more likely drove their evolution. Today, specialized animal weapons like the antlers of deer or the horns of antelopes have usually evolved to be used mostly for fighting members of the same species during battles for mates or territory.

Years ago, Arbour had put forward the idea that ankylosaurs may have clubbed each other in the flanks, and that broken and healed ribs might provide evidence to support this idea. But ankylosaur skeletons are extremely rare, making it hard to test this hypothesis. The completely preserved back and tail of Zuul, including skin, allowed for an unusual glimpse into the lives of these incredible armoured dinosaurs.

“The fact that the skin and armour are preserved in place is like a snapshot of how Zuul looked when it was alive. And the injuries Zuul sustained during its lifetime tell us about how it may have behaved and interacted with other animals in its ancient environment,” said Dr. David Evans, Temerty Chair and Curator of Vertebrate Palaeontology at the Royal Ontario Museum.

The remarkable skeleton of Zuul was found in the Judith River Formation of northern Montana and acquired by the ROM through the generous support of the Louise Hawley Stone Charitable Trust. Funding for this project was also provided by the Natural Sciences and Engineering Research Council, L’Oreal-UNESCO for Women in Science, Alberta Innovates, and the Dinosaur Research Institute.

Ankylosaurs battled each other as much as they fought off T. rex 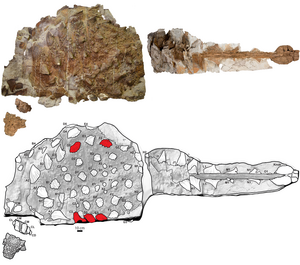 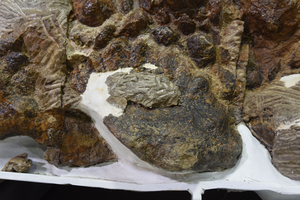 Injured and healed spike from Zuul's left side. 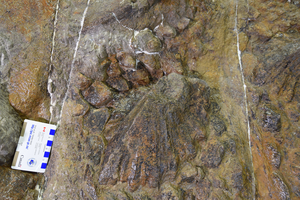 Injured and healed spike on Zuul's right side 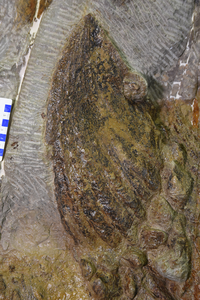 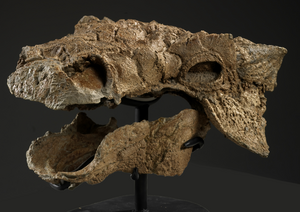