Americans are leaving many of the U.S. counties hit hardest by hurricanes and heatwaves—and moving towards dangerous wildfires and warmer temperatures, finds one of the largest studies of U.S. migration and natural disasters.

The ten-year national study reveals troubling public health patterns, with Americans flocking to regions with the greatest risk of wildfires and significant summer heat. These environmental hazards are already causing significant damage to people and property each year—and projected to worsen with climate change.

“These findings are concerning, because people are moving into harm’s way—into regions with wildfires and rising temperatures, which are expected to become more extreme due to climate change,” said the University of Vermont (UVM) study lead author Mahalia Clark, noting that the study was inspired by the increasing number of headlines of record-breaking natural disasters.

Published by the journal Frontiers in Human Dynamics on December 8, the study—titled “Flocking to Fire”—is the largest investigation yet of how natural disasters, climate change and other factors impacted U.S. migration over the last decade (2010-2020). “Our goal was to understand how extreme weather is influencing migration as it becomes more severe with climate change,” Clark said.

The top U.S. migration destinations over the last decade were cities and suburbs in the Pacific Northwest, parts of the Southwest (in Arizona, Colorado, Nevada, Utah), Texas, Florida, and a large swath of the Southeast (from Nashville to Atlanta to Washington, D.C.)—locations that already face significant wildfire risks and relatively warm annual temperatures, the study shows. In contrast, people tended to move away from places in the Midwest, the Great Plains, and along the Mississippi River, including many counties hit hardest by hurricanes or frequent heatwaves, the researchers say. (See maps for migration hotspots.)

“These findings suggest that, for many Americans, the risks and dangers of living in hurricane zones may be starting to outweigh the benefits of life in those areas,” said UVM co-author Gillian Galford. “That same type of tipping point has yet to happen for wildfires and rising summer heat, our results suggest, probably because they’ve only become problems at the national level more recently.”

One implication of the study—given how development can exacerbate risks in fire-prone areas—is that city planners may need to consider discouraging new development where fires are most likely or difficult to fight, researchers say. At a minimum, policymakers must consider fire prevention in areas of high risk with large growth in human populations, and work to increase public awareness and preparedness.

“We hope this study will increase people’s awareness of wildfire risk,” said Clark, noting the study includes several maps highlighting the severity of national hazards across the country. “When you’re looking for a place to live on Zillow or through real-estate agents, most don’t highlight that you’re looking at a fire-prone region, or a place where summer heat is expected to become extreme. You have to do your research,” said Clark, noting the website Redfin recently added risk scores to listings.

Despite climate change’s underlying role in extreme weather events, the team was surprised by how little the obvious climate impacts of wildfire and heat seemed to impact migration. “If you look where people are going, these are some of the country’s warmest places—which are only expected to get hotter.”

“Most people still think of wildfires as just a problem in the West, but wildfire now impacts large swaths of the country—the Northwest down to the Southwest, but also parts of the Midwest and the Southeast like Appalachia and Florida,” said Clark, a researcher at UVM’s Gund Institute for Environment and Rubenstein School of Environment and Natural Resources.

Beyond the aversion to hurricanes and heatwaves, the study identified several other clear preferences—a mix of environmental, social, and economic factors—that also contributed to U.S. migration decisions over the last decade.

Researchers note that Florida remained a top migration destination, despite a history of hurricanes—and increasing wildfire. While nationally, people were less attracted to counties hit by hurricanes, many people—particularly retirees—still moved to Florida, attracted by the warm climate, beaches, and other qualities shared by top migration destinations. Although hurricanes likely factor into people’s choices, the study suggests that, overall, the benefits of Florida’s desirable amenities still outweigh the perceived risks of life there, researchers say.

“The decision to move is a complicated and personal decision that involves weighing dozens of factors,” said Clark. “Weighing all these factors, we see a general aversion to hurricane risk, but ultimately—as we see in Florida—it’s one factor in a person’s list of pros and cons, which can be outweighed by other preferences.”

For the study, researchers combined census data with data on natural disasters, weather, temperature, land cover, and demographic and socioeconomic factors. While the study includes data from the first year of the COVID pandemic, the researchers plan to delve deeper into the impacts of remote work, house prices, and the cost of living.

The study, “Flocking to Fire: How Climate and Natural Hazards Shape Human Migration Across the United States” is the largest investigation yet of how natural disasters and climate change impacted U.S. migration over the last decade.

As global climate change progresses, the U.S. is expected to experience warmer temperatures, as well as more frequent and severe extreme weather events, including heat waves, hurricanes, wildfires and floods. Each year, these events cost dozens of lives and do billions of dollars worth of damage.

Flocking to Fire: How Climate and Natural Hazards Shape Human Migration Across the United States 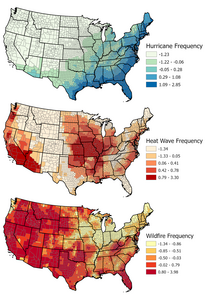