The biological clock is an internal and independent mechanism that dictates daily rhythm, thus enabling an organism to gauge daily and seasonal signals and live in sync with the rhythm of nature, while maintaining timing capabilities that are essential to carrying out important physiological and behavioral processes. For corals, includes breaking down sugar and synthesizing fats, opening and closing their hunting tentacles, and more.

In the marine ecosystem, corals and algae maintain a symbiotic relationship such that corals provide algae with shelter and carbon dioxide, while algae, through photosynthesis, supply corals with food and nutrients vital to their survival. This give-and-take relationship is largely dependent upon synchronization and coordination, and likely requires "cross-talk" between the biological clock of the coral host and that of the symbiont algae.

As rising sea temperatures and increasing bleaching events cause corals to lose their algae and die, researchers are seeking to decipher exactly how this biological mechanism works, and whether corals can survive without the presence of algae for a period of time. This is important in order to understand which species might be “winners or losers” in continued heat wave episodes. Researchers at Bar-Ilan University in Israel have now discovered one species of "winners".

The coral species known as Euphyllia paradivisa (E. paradivisa) has been shown in previous studies to exhibit tolerance to bleaching conditions and survival without algae during prolonged darkness. In a paper recently published in the journal Science Advances, the Bar-Ilan team documented the biological clock of this species for the first time and confirmed what was until now an assumption: their biological clock functions – even at a depth of 65 meters underwater and in almost complete darkness -- without the presence of algae.

Dr. Mieka Rinsky, from Bar-Ilan's Goodman Faculty of Life Sciences, led a team of researchers that transferred abundant E. paradivisa from their marine environment in Israel's Red Sea Gulf of Eilat to a laboratory at the nearby Inter-University Institute for Marine Sciences. The corals were placed in aquariums into which seawater from their natural habitat was pumped. Half of the samples were kept under ambient light and dark cycles, while the other half were kept in complete darkness for a year, triggering a bleaching event to generate aposymbiotic corals in which the algae were expelled from the host tissue.

After one year the biological clock performances in a high number of replicates of symbiotic and aposymbiotic healthy coral colonies were investigated.  Following 48 hours of exposure to light/dark cycles and complete darkness the bleached and unbleached corals were compared. E. paradivisa revealed a biological clock operating on a 12-hour rhythm, guided by tidal cycles and influenced by symbiotic algae. But even more astounding was the discovery that the corals maintain an independent biological clock that controls the timing of their essential metabolic processes. This clock operates on a 24-hour schedule, influenced by light and darkness, similar to that of humans, and functions independently from the algae's clock. Even in their so-called "twilight zone" -- 65 meters underwater and in almost complete darkness – the corals can survive harsh conditions and maintain their resilience without the presence of algae and the benefits yielded from photosynthesis.

"Most research about symbiosis shows that corals die once they're bleached. Here we've found a species that can survive without algae," says Dr. Rinsky, from Bar-Ilan's Laboratory for Molecular Marine Ecology directed by Prof. Oren Levy. "The corals' biological clock can operate without daily changes in oxygen and nutrients in its tissues, which typically results from the presence of their symbiotic algae and, hence, photosynthesis. Corals have a certain 'plasticity' that enables them to shift between different rhythms and survive detrimental situations such as bleaching caused by changes in the environment," she adds.

The fact that the biological clock functions independently of algae allows corals to deal with stressful situations and maintain their daily metabolic and physiological processes. These findings provide a ray of hope for their ability to survive extreme heat. 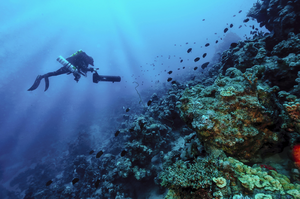