An international team of astrophysicists, including Prof. Rennan Barkana from the Sackler School of Physics and Astronomy at Tel Aviv University, has managed for the first time to statistically characterize the first galaxies in the Universe, which formed only 200 million years after the Big Bang. According to the groundbreaking results, the earliest galaxies were relatively small and dim. They were fainter than present-day galaxies, and likely processed only 5% or less of their gas into stars. Furthermore, the first galaxies did not emit radio waves at an intensity that was much higher than that of modern galaxies.

This new study, carried out together with the SARAS observation team, was led by the research group of Dr. Anastasia Fialkov from the University of Cambridge, England, a former PhD student of Prof. Barkana. The results of this innovative study were published in the prestigious journal Nature Astronomy.

“This is a very new field and a first-of-its-kind study”, explains Prof. Barkana. “We are trying to understand the epoch of the first stars in the Universe, known as the 'cosmic dawn', about 200 million years after the Big Bang. The James Webb Space Telescope, for example, can’t really see these stars. It might only detect a few particularly bright galaxies from a somewhat later period. Our goal is to probe the entire population of the first stars”.

According to the standard picture, before stars began to fuse heavier elements inside their cores, our Universe was nothing but a cloud of hydrogen atoms from the Big Bang (other than some helium and a lot of dark matter). Today the Universe is also filled with hydrogen, but in the modern Universe it is mostly ionized due to radiation from stars.

“Hydrogen atoms naturally emit light at a wavelength of 21cm, which falls within the spectrum of radio waves”, says Prof. Barkana. “Since stellar radiation affects the light emitted by hydrogen atoms, we use hydrogen as a detector in our search for the first stars: if we can detect the effect of stars on hydrogen, we will know when they were born, and in what types of galaxies. I was among the first theorists to develop this concept 20 years ago, and now observers are able to implement it in actual experiments. Teams of experimentalists all over the world are currently attempting to discover the 21cm signal from hydrogen in the early Universe.”

One of these teams is EDGES, which uses a fairly small radio antenna that measures the average intensity on the entire sky of radio waves arriving from different periods of the cosmic dawn. In 2018, the EDGES team announced that it had found the 21cm signal from ancient hydrogen.

“There was a problem with their findings, however," says Prof. Barkana. "We could not be sure that the measured signal did indeed come from hydrogen in the early Universe. It could have been a fake signal produced by the electrical conductivity of the ground below the antenna. Therefore, we all waited for an independent measurement that would either confirm or refute these results. Last year astronomers in India carried out an experiment called SARAS, in which the antenna was made to float on a lake, a uniform surface of water that could not mimic the desired signal. According to the results of the new experiment, there was a 95% probability that EDGES did not in fact detect a real signal from the early Universe.  SARAS found an upper limit for the genuine signal, implying that the signal from early hydrogen is likely significantly weaker than the one measured by EDGES. We modeled the SARAS result and worked out the implications for the first galaxies, i.e., what their properties were given the upper limit determined by SARAS.  Now we can say for the first time that galaxies of certain types could not have existed at that early time.”

Prof. Barkana concludes: “Modern galaxies, such as our own Milky Way, emit large amounts of radio waves. In our study we placed an upper limit on the star formation rate in ancient galaxies and on their overall radio emission. And this is only the beginning. Every year the experiments become more reliable and precise, and consequently we expect to find stronger upper limits, giving us even better constraints on the cosmic dawn. We hope that in the near future we will have not only limits, but a precise, reliable measurement of the signal itself.” 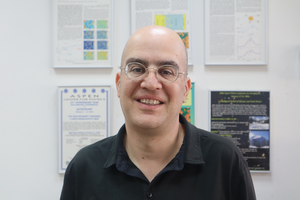