How fast do electrons inside a molecule move? Well, it is so fast that it takes them just few attoseconds (1 as = 10-18 s or one billionth of billionth of a second) to jump from one atom to another. Blink and you missed it – millions of billions of times. So measuring such ultrafast processes is a daunting task.

Scientists at the Australian Attosecond Science Facility and the Centre for Quantum Dynamics of Griffith University in Brisbane Australia, led by Professor Robert Sang and Professor Igor Litvinyuk have developed a novel interferometric technique capable of measuring time delays with zeptosecond (a trillionth of a billionth of a second) resolution.

They have used this technique to measure the time delay between extreme ultraviolet light pulses emitted by two different isotopes of hydrogen molecules – H2 and D2 – interacting with intense infrared laser pulses.

This delay was found to be less than three attoseconds (one quintillionth of a second long) and is caused by slightly different motions of the lighter and heavier nuclei.

This study has been published in Ultrafast Science, a new Science Partner Journal.

The light waves themselves were generated by molecules exposed to intense laser pulses in the process called high harmonic generation (HHG).

HHG occurs when an electron is removed from a molecule by a strong laser field, is accelerated by the same field and then recombines with the ion giving up the energy in the form of extreme ultraviolet (XUV) radiation. Both intensity and phase of that XUV HHG radiation are sensitive to exact dynamics of the electron wavefunctions involved in this process – all different atoms and molecules emit HHG radiation differently.

While it is relatively straightforward to measure spectral intensity of HHG – a simple grating spectrometer can do that – measuring HHG phase is a far more difficult task. And the phase contains the most relevant information about the timing of various steps in the emission process.

To measure this phase, it is usual to perform a so-called interferometric measurement when two replicas of the wave with finely controlled delay are made to overlap (or interfere) with each other. They can interfere constructively or destructively depending on the delay and relative phase difference between them.

Such measurement is performed by a device called an interferometer. It is very difficult to build an interferometer for XUV light, in particular to produce and maintain a stable, known and finely tuneable delay between two XUV pulses.

The Griffith researchers solved this problem by taking advantage of the phenomenon known as the Gouy phase – when phase of a light wave is shifted a certain way while going through a focus.

For their experiments the researchers used two different isotopes of molecular hydrogen – the simplest molecule in nature. The isotopes – light (H2) and heavy (D2) hydrogen – differ only in mass of nuclei – protons in H2 and deuterons in D2. Everything else including the electronic structure and energies are identical.

Due to their larger mass the nuclei in D2 move slightly slower then those in H2. Because nuclear and electronic motions in molecules are coupled, nuclear motion affects the dynamics of the electron wavefunctions during the HHG process resulting in a small phase shift ΔφH2-D2 between the two isotopes.

This phase shift is equivalent to a time delay Δt = ΔφH2-D2 /ω where ω is the frequency of the XUV wave. The Griffith scientists measured this emission time delay for all the harmonics observed in the HHG spectrum – it was nearly constant and slightly below 3 attoseconds.

To understand their result the Griffith researchers were supported by theorists at Shanghai Jiao Tong University in Shanghai, China, led by Professor Feng He.

The SJTU scientists used the most advanced theoretical methods to comprehensively model the HHG process in the two isotopes of molecular hydrogen including all degrees of freedom for nuclear and electronic motion at various levels of approximation.

Their simulation reproduced experimental results well, and this agreement between theory and experiment gave the team confidence that the model captured the most essential features of the underlying physical process, so adjusting the model’s parameters and levels of approximation can determine the relative importance of various effects.

While the actual dynamics is quite complex, it was found that two-centre interference during the electron recombination step is the dominant effect.

“Because hydrogen is the simplest molecule in nature and it can be modelled theoretically with high accuracy it was used in these proof-of-principle experiments for benchmarking and validation of the method,” Professor Litvinyuk said.

“In the future, this technique can be used to measure ultrafast dynamics of various light-induced processes in atoms and molecules with unprecedented time resolution.”

The findings ‘Attosecond Delays of High-Harmonic Emissions from Hydrogen Isotopes Measured by XUV Interferometer’ have been published in Ultrafast Science.

Measuring times in billionths of a billionth of a second 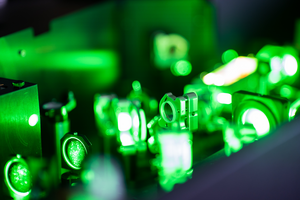 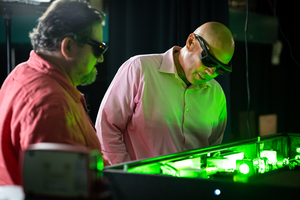