Long-term recurrence and survival data are now available from the groundbreaking Trial Assigning Individualized Options for Treatment (Rx) or TAILORx trial. With 12 years of follow-up, the updated analysis confirms the original findings that chemotherapy has no benefit for a large proportion of women with early-stage breast cancer. In addition, the longer follow-up reveals unexpected information about late recurrences. There was also a higher risk of early recurrence in Black women.

"The immediate clinical impact is that with longer follow-up, the main TAILORx study findings remain unchanged. Therefore, physicians can continue to use the 21-gene recurrence score results to guide decisions about the use of chemotherapy," said Dr. Sparano, deputy director of The Tisch Cancer Center at Mount Sinai Health System and leader of TAILORx for the ECOG-ACRIN Cancer Research Group.

Estrogen receptor-positive (ER+) and HER2-negative (HER2-) breast cancer with no spread to the lymph nodes accounts for about one-half of all new breast cancers in the United States each year. The landmark TAILORx trial gave an evidence-based answer to the question of which women with this type of breast cancer may benefit from chemotherapy as a potentially life-saving treatment—and which may effectively pursue endocrine therapy (ET) alone and avoid the unnecessary side effects of chemotherapy.

The study used a molecular test that assesses the expression of 21 genes associated with breast cancer recurrence (on a scale of 0-100).

After following 10,273 women for at least 5 years (median of 7.5 years), TAILORx established that chemotherapy may safely be spared in women with ER+, HER2-, and lymph node-negative breast cancer with a 21-gene recurrence score of 0-25 who were postmenopausal or older than 50 at diagnosis. It may also be spared in most women with this type of breast cancer who were younger than 50 or premenopausal (Sparano JA, N Engl J Med, 2018 and here).

In this updated analysis, trial volunteers were followed for an additional 3.5 years, now for an average of 11 years. The main study findings remain unchanged: chemotherapy use may be spared in many women with ER+, HER2-, and lymph node-negative breast cancer when guided by the 21-gene recurrence score result. As in the original analysis, the subgroup of women aged 50 and younger with a score of 21-25 or 16-25 and high clinical risk derived some chemotherapy benefit that persists out to 12 years. This cohort accounted for 7% of the trial population.

"There is a higher risk of developing a new breast cancer or other cancer than having a recurrence of the original cancer, pointing out the need for vigilance in cancer screening after a breast cancer diagnosis," said Dr. Sparano.

"More research is needed to develop more effective therapies for women with a very high recurrence score who have unacceptably high recurrence risk despite the use of chemotherapy,” said Dr. Sparano.

"Racial disparities were noted that were not explained by inequities in social determinants of health or by stopping anti-hormonal endocrine therapy early," said Dr. Sparano. "This finding adds to a growing body of evidence suggesting biological factors may contribute to the body developing resistance to endocrine therapy."

TAILORx is one of the first large-scale trials to examine a method for personalizing cancer treatment. When the trial opened, the best available genomic profiling data in women with early-stage breast cancer were retrospective.

The study was conducted by ECOG-ACRIN with funding from the National Cancer Institute, part of the National Institutes of Health. Other NCI-funded network groups took part in the study. It was supported in part by the Breast Cancer Research Foundation, Susan G.  Komen (R), and the Breast Cancer Research Stamp. The genomic assay used in the trial was the Oncotype DX Breast Recurrence Score® test from Exact Sciences Corporation, Madison, WI.

The ECOG-ACRIN Cancer Research Group is a membership-based scientific organization that designs and conducts cancer research involving adults who have or are at risk of developing cancer. ECOG-ACRIN comprises nearly 1300 member institutions and 15,000 research professionals in the United States and around the world. Visit ecog-acrin.org, follow us on Twitter @eaonc, Facebook, LinkedIn, and Instagram, or call 215.789.3631.

The TAILORx trial in over 10,000 women with early breast cancer reaches 12 years of recurrence and survival outcomes 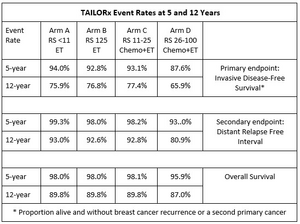