This study is led by Prof. Wenjing Hong (College of Chemistry and Chemical Engineering, Xiamen University), Prof. Colin J. Lambert (Department of Physics, Lancaster University) and Prof. Zitong Liu (College of Chemistry and Chemical Engineering, Lanzhou University). When conducting the thermoelectricity measurement of single diketopyrrolopyrrole (DPP) derivative molecules, the research team found that Seebeck coefficient was influenced by the immersion concentration during the molecule-assembling step. They thought this phenomenon was probably due to different intermolecular coupling strength at different immersion concentrations. In order to explore this problem, this study was carried out based on the home-built scanning tunneling microscope break-junction (STM-BJ) technique and self-assembling monolayer (SAM) technique.

This team firstly assembled three different types of DPP derivatives on gold electrode respectively to form SAMs with different immersion concentrations, according to characterization of cyclic voltammetry (CV), x-ray photoelectron spectroscopy (XPS) and micro thermal gravimetric analyzer (m-TGA), they found the immersion concentration has a large influence on the packing density of SAMs. With increase of immersion concentration from 0.01mM to 1mM, the molecules coverage on gold electrode surface could be increased from 7.84% to 29.41%, meaning more dimers and trimers could be formed, and the intermolecular couping is stronnger in SAMs with higher packing density.

Scanning tunneling microscope break-junction (STM-BJ) technique is used to measure single molecules thermoelectricity with different assembly concentrations. It is found that the single molecules Seebeck coefficient of three types DPPs all increases with the increase of assembly concentration. The Seebeck coefficient of one type of DPP even increased from -2.16 mV/K (0.01mM concentration assembly) to -18.05 mV/K (1mM concentration assembly), achieving a jump of nearly one order of magnitude, exceeding the maximun tuning efficiency in previously reported works.

Meanwhile, the researchers also performed density functional theory (DFT) calculations, and found that the thermopower enhancement of the single molecule is due to the smaller HOMO-LUMO band gap, which results in a larger energy-dependent variation of the electron transmission at the Fermi level of the electrode, thus leading to an enhancement of Seebeck coefficient.

Enhancement of thermopower in single-molecules junctions by intermolecular coupling 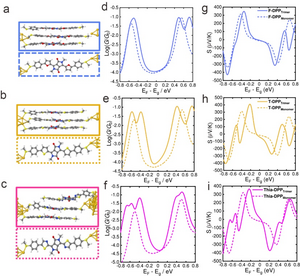