As part of the CAFE-Brazil expedition, about 70 scientists will travel to Manaus in December and January. The airport of the capital of the Brazilian state of Amazonas is the take-off and landing point for the 20 planned measurement flights with the research aircraft HALO (High Altitude and Long Range Research Aircraft). HALO, operated by the German Aerospace Center (DLR), is suitable for high altitudes and long ranges and is used for scientific research into the Earth's atmosphere. For the CAFE-Brazil mission, the research team has equipped HALO with 19 instruments that will measure dozens of parameters, including aerosols, volatile organic compounds (VOCs), sulfur and nitrogen oxides, carbon monoxide, methane, ozone, free radicals, and water.

“We expect to gain new insights into the chemical processes in the atmosphere above the tropical rainforest and also into the interactions between the biosphere and the atmosphere, in order to better explain the fundamental role of the rainforest in the terrestrial system," says Jos Lelieveld, scientific leader of the research expedition and director at the Max Planck Institute for Chemistry. Joachim Curtius, experimental atmospheric scientist and professor at Goethe University in Frankfurt, is also looking forward to the research flights with excitement: "We are glad to be part of this important project and that it can finally get underway. Our focus is on the formation of particles from trace gases emitted by the forest." CAFE-Brazil was actually supposed to be launched in spring 2020, but had to be postponed due to the Coronavirus crisis.

The São Paulo University (USP) is a long-term partner with Max Planck, studying trace gases, aerosols and clouds over the Amazon, for the last 25 years. “Amazonia is critical for global climate change, and we need a better understanding of the links between forest emissions, atmospheric transport and the impact of climate change in the forest. The strategies to preserve the Amazon Forest needs to be based on Science to be effective, and experiments like this provides the framework to protect the rain forest,” says Paulo Artaxo from the Physics Institute at USP. “The CAFÉ-Brazil experiment will provide new insights on the links between high altitude and forest biology, connected via vertical convection and downdrafts, and it complements nicely the long-term measurements at the ATTO tower,” adds Luiz Augusto Machado from INPE and USP.

Measurement flights in the troposphere

The flights over the rainforest will follow set patterns to measure vertical and horizontal profiles. The plan also includes so-called helix flights, during which HALO will spiral from low altitudes up to an altitude of 15 kilometers. The researchers want to use the aircraft measurements to find out how atmospheric oxidation processes take place in the troposphere above the Amazon rainforest and how they influence the formation and growth of aerosol particles, which are of central importance as cloud condensation nuclei.

The scientists also want to find the answer to the question of why the atmosphere's self-cleansing nature does not suffer over the rainforest, even though huge amounts of hydroxyl radicals are constantly being consumed. The chemical compound is considered a detergent for the atmosphere because it oxidizes pollutants such as methane and produces water-soluble reaction products that are washed out of the air with the rain.

Studies at the German-Brazilian research station ATTO (Amazon Tall Tower Observatory), a 325-meter-high steel tower in the middle of the northern Brazilian Amazon rainforest about 150 kilometers from Manaus, will complete the measurements with HALO. In addition to climate observations at different heights in the atmosphere, ATTO will enable research into the rainforest biosphere. Since a similar set of instruments is deployed on the tower as on HALO, this offers a unique opportunity to link measurements in and directly above the rain forest.

The researchers want to compare the data sets obtained in the largely clean air above the Amazon rainforest with results obtained in part from earlier measurement campaigns under marine and polluted conditions, which also focused on air pollution.

Background information on the campaign:

The VOCs undergo chemical changes in the air. This involves so-called hydroxyl radicals. This chemical compound oxidizes pollutants such as methane and makes them water-soluble. They are virtually washed out of the air with the precipitation.

Research in and high above the Amazon rainforest 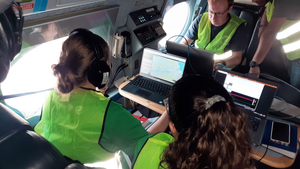 View into the cabin