A research team, led by the Nano Optics Group within the Department of Physics at UNIST has reported that they succeeded in achieving all-vanadium dioxide (VO2) multifunctional metasurfaces which perform as a transparent window in the broadband THz regime with variable DC conductivity of dynamic range over three decades and selective switchability of near-infrared (NIR) diffraction.

Metasurfaces are made of artificially two-dimensional (2D) subwavelength-scaled nanostructures whose properties could not be found in natural materials. The newly-proposed metasurfaces are expected to be used in various applications, such as the next-generation wireless communication systems, such as 6G.

In this study, the research team successfully fabricated slit arrays with micrometer scale dimensions by conducting photolithography, followed by thermal oxidation of pre-defined vanadium metal structures without etching damage on the substrate.

The research team further examined the transmission, reflection, and absorption in the THz regime across the phase change temperature experimentally and theoretically and revealed that the metasurface is constantly transparent while the VO2 electrodes change from insulating to metallic due to light funneling through the subwavelength slits.

Furthermore, by thermally controlling the NIR optical path difference between the slits and the VO2 electrodes, the research team could achieve successful switching between destructive and constructive interferences of the zeroth-order diffraction.

“The etching-free fabrication method and multifunctional THz transparency demonstrated here will be fruitful for VO2 metasurface applications, such as multispectral smart windows and hybrid communications,” noted the research team.

The findings of this study have been published in the November 2022 issue of Laser & Photonics Reviews, a renowned scientific journal journal covering research on all aspects of optical science. This study has been supported by the National Research Foundation of Korea (NRF).

Fabrication and characterization of VO2 metasurfaces 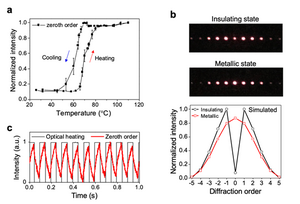 Selective switching of the zeroth-order diffraction at 790 nm.