As hurricane Michael churned through the Gulf of Mexico to make landfall near Florida’s Apalachicola River in 2018, it left a sea of destruction in its wake.

The path was easy to follow on land, but debris and infrastructure failures also diminished the river’s water quality and led to the death of roughly half the gulf sturgeon population there. A study by researchers at the University of Georgia with the U.S. Fish and Wildlife Service reveals new details in how a decrease in oxygen levels affected the river’s ability to sustain life in the days following the historic Category 5 storm.

The results were published in the December issue of Transactions of the American Fisheries Society.

Data supporting the findings was possible due to an ongoing long-term project in the Apalachicola River monitoring gulf sturgeon. Fish that had been fitted with special tags continued to be tracked by equipment that survived the storm, while weather stations and tide gauges reported statistics such as temperature, water flows and oxygen levels.

As a result, scientists with the UGA Warnell School of Forestry and Natural Resources have a precise timeline of what happened with oxygen levels in the river, as well as the fate of sturgeon that were able to escape up the river or into the Gulf of Mexico.

“We had a couple different metrics for ‘before’ adult population estimates, and there’s also monitoring for other [sturgeon] in all the rivers nearby, so we would know if they went into other rivers,” said Adam Fox, an assistant research scientist at Warnell and co-author of the study. “So, all of that gave us information that we saw a decline of 36% to 60% of the adult fish compared to pre-storm estimates.”

Sturgeon are listed as a federally protected species. The range of the fish, which lives in both the Gulf of Mexico and nearby rivers, once spanned from Tampa Bay to New Orleans. Today, small populations persist in only seven rivers, with the largest populations in the Suwanee and Apalachicola rivers.

Hurricane Michael made landfall on Oct. 10, 2018. Data collected in subsequent days showed fish that left the river within 60 hours—by Oct. 13—survived. Typical oxygen levels in the Apalachicola River range from between 4 and 6 milligrams per liter, but in the aftermath of hurricane Michael, the level dropped to around zero and stayed there for almost a month after the storm. When debris, sewage or other nutrients increase in a waterway, it can reduce the amount of oxygen that’s dissolved in the water and available to aquatic life. Previous studies have documented drops in water oxygen levels due to hurricanes—and the resulting fish kills—but this is the first study to quantitatively assess how a hurricane affected gulf sturgeon.

With a population estimated to be around 1,000 adult fish, losing between 30% and 60% could be an immense setback, said Fox, especially as hurricanes are forecast to gain in number and strength due to climate change.

“This is obviously very concerning, especially because with climate change, hurricanes are supposed to increase with frequency and intensity,” said Fox, noting that hurricanes historically have hit the western portions of the panhandle—areas where gulf sturgeon have struggled for generations.

But then Fox and the study’s lead author, 2021 Master of Science graduate Brendan Dula, realized another aspect of the sturgeon population still hadn’t been accounted for.

“Because if the adults were dying, we thought we were probably going to lose an entire juvenile year class,” he added. After hatching further upstream, juvenile sturgeon spend the first couple years of their life in estuaries—not quite the gulf, but not quite the river.

When Michael hit, the team had only tagged five juveniles—and all of them disappeared. The next year, when they set out to count the most recent juvenile fish to enter the estuaries, they were surprised by what they found.

“We actually had more ‘age 1’ fish than we’d had in the years before the storm. And so somewhere upriver they found some sort of refuge. Probably, we think, below Jim Woodruff Lock and Dam where water may have been better oxygenated,” said Fox. “Gulf sturgeon spawn in the spring, but there’s growing evidence that sometimes they also spawn in the fall. Spawning is also related to flow, and so high flow from the river may have made for a successful fall spawn.”

Despite laying up to 400,000 eggs each year per fish, only about 50 offspring typically survive to age 1 each year in the Apalachicola River. But in the two years since hurricane Michael, the number of juveniles each year is now over 100.

“They’re very sensitive to a lot of things and have a slow maturation—between 8 and 15 years. So, if adults are harvested or killed by hurricanes, that has huge impacts down the road,” said Fox. “But as long as there’s some sort of refuge for them, the next generation may survive. It may take a while before they can spawn on their own, but at least they’re around.”

Transactions of the American Fisheries Society

Effects of Hurricane Michael on Gulf Sturgeon in the Apalachicola River system, Florida 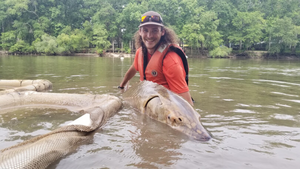 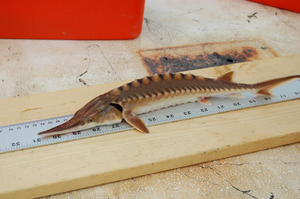