While studying the aftermath of a long gamma-ray burst (GRB), two independent teams of astronomers using a host of telescopes in space and on Earth, including the Gemini North telescope on Hawai‘i and the Gemini South telescope in Chile, have uncovered the unexpected hallmarks of a kilonova, the colossal explosion triggered by colliding neutron stars. This discovery challenges the prevailing theory that long GRBs exclusively come from supernovae, the end-of-life explosions of massive stars.

Gamma-ray bursts (GRBs) — the most energetic explosions in the Universe — come in two varieties, long and short. Long GRBs, which last a couple of seconds to one minute, form when a star at least 10 times the mass of our Sun explodes as a supernova. Short GRBs, which last less than two seconds, occur when two compact objects, like two neutron stars or a neutron star and a black hole, collide to form a kilonova.

While observing the aftermath of a long GRB detected in 2021, two independent teams of astronomers found the surprising signs of a neutron-star merger rather than the expected signal of a supernova. This surprising result marks the first time that a kilonova has been associated with a long GRB and challenges our understanding of these phenomenally powerful explosions.

The first team to announce this discovery was led by Jillian Rastinejad, a PhD student at Northwestern University. Rastinejad and her colleagues made this startling discovery with the help of Gemini North, part of the International Gemini Observatory, which is operated by NSF’s NOIRLab. The Gemini North observations revealed a telltale near-infrared afterglow at the precise location of the GRB, providing the first compelling evidence of a kilonova associated with this event [1]. Rastinejad’s team promptly reported their Gemini detection in a Gamma-ray Coordinates Network (GCN) Circular.

Astronomers around the world were first alerted to this burst, named GRB 211211A, when a powerful flash of gamma rays was picked up by NASA's Neil Gehrels Swift Observatory and Fermi Gamma-ray Space Telescope. Initial observations revealed that the GRB was uncommonly nearby, a mere one billion light-years from Earth.

Most GRBs originate in the distant, early Universe. Typically, these objects are so ancient and far flung that their light would have had to travel for more than six billion years to reach Earth. Light from the most-distant GRB ever recorded traveled for nearly 13 billion years before being detected here on Earth [2]. The relative proximity of this newly discovered GRB enabled astronomers to make remarkably detailed follow-up studies with a variety of ground- and space-based telescopes.

“Astronomers usually investigate short GRBs when hunting for kilonovae,” said Rastinejad. “We were drawn to this longer-duration burst because it was so close that we could study it in detail. Its gamma rays also resembled those of a previous, mysterious supernova-less long GRB.”

A unique observational signature of kilonovae is their brightness at near-infrared wavelengths compared to their brightness in visible light. This difference in brightness is due to the heavy elements ejected by the kilonova, which effectively block visible light but allow the longer-wavelength infrared light to pass unimpeded. Observing in the near-infrared, however, is technically challenging and only a handful of telescopes on Earth, like the twin Gemini telescopes, are sensitive enough to detect this kilonova at these wavelengths.

“Thanks to its sensitivity and our rapid-response, Gemini was the first to detect this kilonova in the near-infrared, convincing us that we were observing a neutron-star merger,” said Rastinejad. “Gemini’s nimble capabilities and variety of instruments let us tailor each night’s observing plan based on the previous night’s results, allowing us to make the most of every minute that our target was observable.”

Another team, led by Eleonora Troja, an astronomer at the University of Rome Tor Vergata, independently studied the afterglow using a different and a different series of observations, including the Gemini Southtelescope in Chile, [3] and independently concluded that the long GRB came from a kilonova.

”We were able to observe this event only because it was so close to us,” said Troja. “It is very rare that we observe such powerful explosions in our cosmic backyard, and every time we do we learn about the most extreme objects in the Universe.”

The fact that two different teams of scientists working with independent datasets both arrived at the same conclusion about the kilonova nature of this GRB provides confidence in this interpretation.

“The kilonova interpretation was so far off from everything we knew about long GRBs that we could not believe our own eyes and spent months testing all the other possibilities,” said Troja. “It is only after ruling out everything else that we realized our decade-long paradigm had to be revised.”

As well as contributing to our understanding of kilonovae and GRBs, this discovery provides astronomers with a new way to study the formation of gold and other heavy elements in the Universe. The extreme physical conditions in kilonovae produce heavy elements such as gold, platinum, and thorium. Astronomers can now identify the sites that are creating heavy elements by searching for the signature of a kilonova following a long-duration gamma-ray burst.

“This discovery is a clear reminder that the Universe is never fully figured out,” said Rastinejad. “Astronomers often take it for granted that the origins of GRBs can be identified by how long the GRBs are, but this discovery shows us there’s still much more to understand about these amazing events.”

[2] Light that has traveled nearly 13 billion years to reach Earth would have a redshift (z) of about 7. Due to the accelerating expansion of the Universe, that would roughly equate to a distance of 24.5 billion light-years today. When talking about large redshifts, those greater than 1, and cosmically distant objects, it is more accurate to state how many billions of years the light has traveled rather than a distance in light-years.

[3] Troja and her colleagues initially observed the afterglow of this event with the Devasthal Optical Telescope, the Multicolor Imaging Telescopes for Survey and Monstrous Explosions, and the Calar Alto Observatory. They obtained observations of the host galaxy with the NASA/ESA Hubble Space Telescope.

“A kilonova following a long-duration gamma-ray burst at 350 Mpc.” 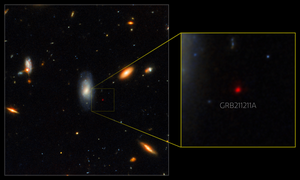 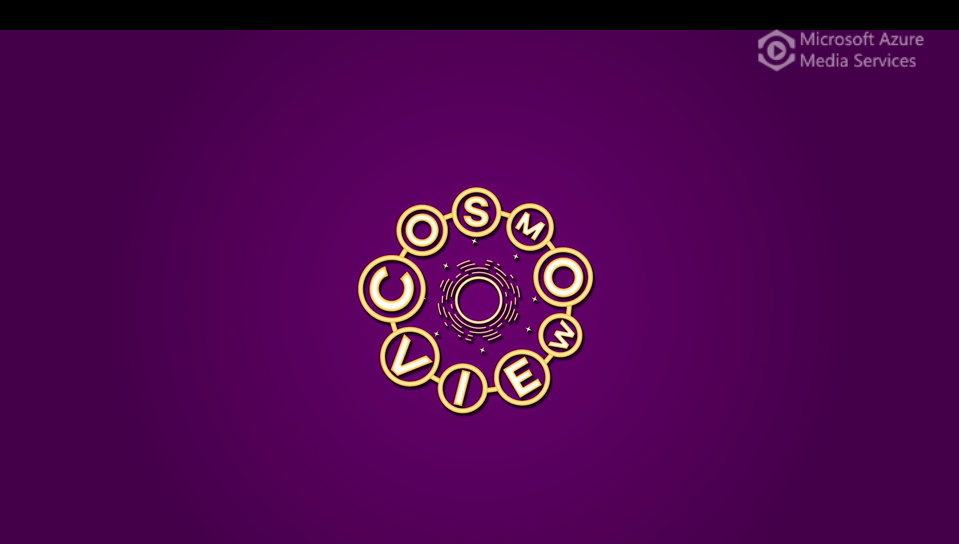