Forgeries are a lucrative global market created by artists so skilled in both their craft and their duplicity that they sometimes fool even the experts.

Curators at the Taft Museum of Art are using scientific tools more commonly associated with geology and chemistry to answer questions about masterpieces that have perplexed generations of art historians.

The museum invited geologists, chemists and art historians from the University of Cincinnati to their conservation lab to deploy X-ray fluorescence spectroscopy and microscopy on two beautiful but suspect paintings in its collection.

The Taft Museum of Art’s curators and other scholars have traced the origins of nearly all of the museum’s nearly 800 works, including paintings, decorative art and furniture. Their meticulous work since opening in 1932 has called into question the authenticity of a few pieces the museum has kept off exhibit — until now.

Taft opened an exhibition titled Fakes, Forgeries, and Followers in the Taft Collection, which runs through Feb. 5, showcasing paintings, decorative arts and furniture previously attributed to artists such as Dutch master Rembrandt and Spanish artist Goya. Some of these pieces have not been displayed in nearly 30 years, including two paintings UC’s researchers examined.

The first, titled “Panel with the Crucifixion,” is a depiction of the Crucifixion, one of the most iconic stories in Christianity, on a gold background on a decorative wood panel. It is in the style of early Italian Renaissance artist Bernardo Daddi who painted similar scenes of the Crucifixion and other religious iconography in the 13th century.

Museum curator Tamera Lenz Muente said experts have questioned the authenticity of the piece. In the 1995 catalogue of the Taft Museum of Art’s European and American Paintings, the late art historian Rona Goffen was skeptical of the painting’s creator.

To learn more, the museum turned to an interdisciplinary team of researchers in UC’s College of Arts and Sciences and College of Design, Architecture, Art, and Planning.

Strobbia and colleagues at Italy’s Institute of Heritage Science, recently helped the Cincinnati Art Museum determine if portions of a restored 1,300-year-old Chinese dancing horse sculpture were original to the work. Strobbia’s chemical analysis determined that a tassel on the ancient sculpture’s forehead was made from a different material than the rest of the terra cotta horse.

Platts has an enduring fascination with the history of art forgery. Forgeries sometimes are made explicitly to fool buyers. Other times, artists are merely inspired by the greats, he said.

“Artists will sometimes emulate those they admire and do so in such a convincing way that it’s hard to tell their works apart,” he said. “The way artists learn is by duplicating others’ work.”

“Zinc white was not available during the Italian Renaissance,” she said. “Finding that would be a giveaway.”

But it’s still unknown whether the painting represents an intentional forgery or merely an imitation, she said.

“There are many layers to these stories. Using both science and scholarship to reveal the true origins of a work of art is fascinating but still leaves some questions,” Muente said.

Next, the researchers turned to a more recent work titled “Landscape with Canal,” circa 1820-1860, once thought to be by English landscape painter John Constable whose signature adorns it. It depicts a pastoral scene of a farm reflected in the placid water of a canal. There are sleepy horses, heads drooped, and passengers embarking on a boat down the canal near two other boats docked in a corner next to some grazing cows.

Art historians said the painting is very much in the manner of Constable’s works. But experts have said the artist more likely was Frederick Waters Watts, whose work follows the landscape master.

UC's examination was inconclusive. Constable's signature is partially covered in brush strokes, suggesting the artist had signed it and then made some later final touches to the masterpiece.

Platts said yellow paint strokes over the signature are a red flag.

“It was almost as if they were trying too hard,” he said. “Why would you paint over the signature?”

UC researchers are excited about their collaborations with the area’s museums. And they think there could be more demand for scientific analysis of the region’s artworks.

“The Taft Museum of Art is telling new stories about these works that the public has never seen before,” Platts said.

Art museums team up with scientists to ferret out fakes 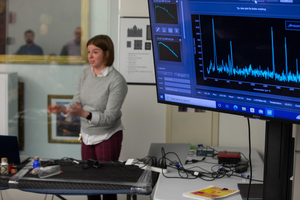 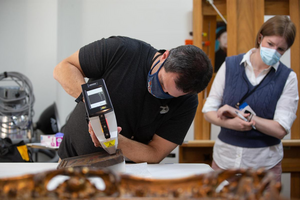 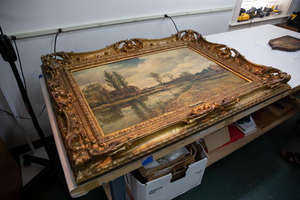